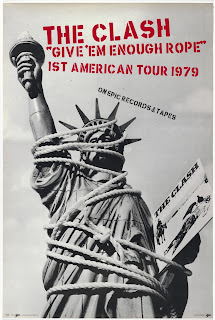 Last month I put together a show that featured nothing but music from my favorite year of rock and roll. 1978 was such an easy theme, and it just couldn't be contained in one episode. In fact, thanks to some further research over the last few weeks there are plans to have up to five shows of tracks celebrating their 40th anniversaries.

The most important record of this show is undoubtedly the second Clash album. "Give 'Em Enough Rope" came out in November 1978, and was the first "punk" record I bought when the week it was released. I've loved it ever since, and it was hard to pick three songs to represent it on tonight's show. As a bonus, I threw in "Clash City Rockers", one of their single releases from that year.

You can find this show at almost any podcast site, including iTunes and Stitcher. Or...

1. The Clash, Safe European Home
2. Blondie, Hanging On The Telephone
3. Patti Smith, Till Victory
4. Talking Heads, Thank You For Sending Me An Angel
5. Johnny Thunders, You Cant Put Your Arms Round A Memory
6. David Johansen, Girls
7. The Pagans, What's This Shit Called Love?
8. Rubber City Rebels, Rubber City Rebels
9. Cramps, Human Fly
10. Siouxsie & The Banshees, Helter Skelter JPS 6.2.78
11. X-Ray Specs, I Am A Poseur
12. The Bags, Survive
13. X, Adult Books
14. The Kinks, A Rock 'N Roll Fantasy
15. The Jam, David Watts (Single Mix)
16. The Soft Boys, I Want To Be A Anglepoise Lamp
17. The Records, Starry Eyes
18. Chris Bell, I Am The Cosmos
19. The Clash, Clash City Rockers
20. The Clash, Stay Free
21. The Clash, All The Young Punks (New Boots And Contracts)
22. The Nervebreakers, My Girlfriend Is A Rock
23. Black Flag, Wasted
24. The Suburbs, You
25. The Suicide Commandos, Attacking the Beat
26. Police, So Lonely
27. The Drones, Be My Baby
28. Rich Kids, Ghosts Of Princes In Towers
29. The Rezillos, Top Of The Pops
30. The Zeros, Wild Weekend
31. The Hollywood Squares, Hillside Strangler
32. The Weirdos, We Got The Neutron Bomb
Email Post
Labels: 1978 live ledge punk rock scott hudson