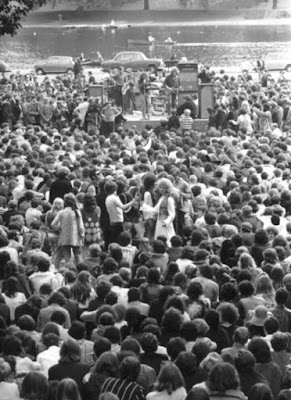 50 years ago The Beatles were still together. Brian Jones was still a member of the Rolling Stones. The Kinks were banned from touring the U.S. The Monkees were making psychedelic films.

Yes, a lot has changed since 1968, and I'm not even going to mention the political upheaval of the time. (Sadly, our current climate somewhat mirrors what went down back then.) Garage rock was still being created in every town in America, and the British Invasion was in full force.

But rock and roll was changing, One could make the case that 1968 was the year it evolved into "rock", as psychedelia faded away into a more aggressive style. Yet at the same time there was a "get back to the country movement" started by The Byrds and The Band but picked up by musicians and fans all over the world.

Tonight's show ignores most of the obvious tracks of that time, although the recent box sets of The Kinks, Small Faces, and The Beatles were impossible to ignore. In fact, it's the giant "White Album" box set that truly inspired this show.

Special thanks goes to my Facebook friends, who suggested a few of tonight's songs, including the great singles by Jay-Bees and Golden Cups. As always, I hope everybody discovers a band or two they've never heard before! You can find this show at almost any podcast site, including iTunes and Stitcher. Or...