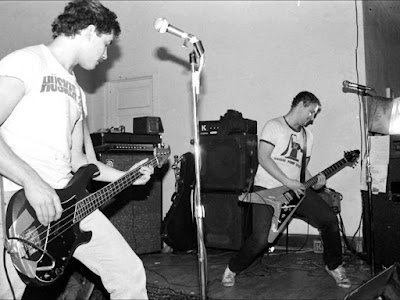 March 30, 1979 is an important date in indie rock history, as it was on that evening that Bob Mould, Grant Hart, and Greg Norton shared the stage for the first time. They were not yet known as Husker Du when Cheapo Records manager Charlie Pine, who also played keyboards with the fledgling band, got them the gig at a St. Paul bar named Ron's. The rest, of course, is Minneapolis rock and roll history.

Husker Du was the newest band to hit the growing Twin Cities rock and roll scene. The Hysptrz, The Suicide Commandos, The Suburbs, and Curtiss A had already released records, mainly on Twin/Tone Records. That fledgling label's 1979 compilation album, Big Hits From Mid-America Vol. 3, is the perfect showcase of what was happening in what many like to claim is an unlikely city.

Other Midwest cities obviously had their own little scenes, and tonight's show dedicated to the Midwest in 1979 travels to Nebraska, Chicago, Indianapolis, Cleveland, Detroit, and Louisville. As always, I hope everybody discovers a band or two they've never heard before! You can find this show at almost any podcast site, including iTunes and Stitcher...or