Skip to main content
April 12, 2005
After getting the ok, I quickly lined up for the photo. Although an unfortunate fall onto my garage floor had shattered the lens of my cell phone, it was all I had. As I took the photo, one of her co-conspirators approached and thrust one of their propaganda papers in my hand. “Can I take a photo of the two of you together?”
That answer was obvious. I handed him the cell phone and posed with my future wife. Despite the pledge that I made a month ago after the disastrous photos with Paul Westerberg, I couldn’t back down from this opportunity. Plus, nobody’s even going to notice I’m in this photo.
As much as I wanted to rescue this beauty queen from the cold air and pouring rain, I knew they had a job to do. I jotted down my website address, and told them a little about my weekly radio rant, and sadly went on my way. 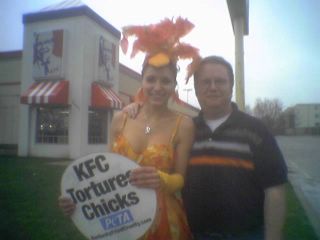 Me and the hot PETA chick.
Posted by Hello

But I’m not here today to express my love for people that I’ll never see again. My job is to kick somebody out of town. It’s hard to turn on the anger after reliving my five minutes with PETA’s hottest body, but I’ll do my best.
Today’s rant begins three days ago, as I made my way to Black Sheep Coffee for my late Sunday morning pick-me-up. Normally, the quickest way to get to my second home is via the back roads just west of Minnesota Avenue. There’s few stop signs, and traffic is generally light.
Not on this rainy Sunday morning. First, a little background on the situation that’s about to unfold. A few years ago, the city initiated a program that allowed targeted neighborhoods to pile unwanted possessions for city pickup. I approve of this program, even though my neighborhood is never selected.
After turning onto one of these side streets, I immediately had to lunge around a giant pickup with Minnesota license plates that was parked at close to a forty-five degree angle. The clem owner of this truck was sorting through a pile of damp wood scraps, furniture, and other trash. Finishing with one pile, he walked down to the next house and picked up a mattress that appeared to have been used for a virgin sacrifice. MMM - stained, damp, and comfy!!!
Hoping this was an isolated incident, I made the turn onto 13th Street. This time, it was a vehicle with an Iowa plate. The actions of the prior vehicle were repeated, but his pickup was filled with garbage. But he was just as good at parking as the Minnesotan. Passing his pickup, I looked inside and found this heavyweight woman with a newborn on one and a smoke in her other hand. No car seat was in sight…but maybe that was one of the items they were looking for.
This scene was replayed throughout the entire neighborhood – strangers burrowing through other people’s trash. I guess you could call it Clem-ingwood Rummage. But it’s wrong. I know what some of you are thinking – they’re throwing it out anyway. What’s the harm?
Well, I don’t go through your garbage, and when I set my garbage out every Monday I don’t expect anybody to tear through my trash. It’s private property, and unless you ask permission, it’s trespassing.
God, I’m getting upset once again. It’s time for me to re-read the opening paragraphs, and recall the hot babe that stole my heart for almost five minutes. If you’re listening, my beautiful defender of poor feathered creatures, you can come protest anytime at my house!
Email Post