Rhino has announced plans to release Son Volt: A Retrospective 1995-2000 on May 24th. The 20-track compilation will feature 5 unreleased tracks alongside album tracks, rarities and demos: 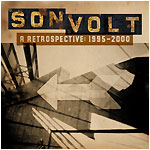 In other Son Volt news:
On May 10, New West Records will release Son Volt's 1997 Austin City Limits performance in its' entirety on DVD. The session was edited to 30 minutes and was originally aired on PBS alongside a performance from Gillian Welch and David Rawlings.
The band has also finished recording their fourth album -- the first new release since 1998’s Wide Swing Tremolo (Warner Bros. Records). This time around, though, fans will be seeing (and hearing) a different collection of side musicians performing with Farrar. After several months of discussions and planning with the original Son Volt players—Dave Boquist, Jim Boquist and Mike Heidorn—Farrar was unable to reach acceptable business terms with the original line-up. “Times change, and so do people, I guess,” reflected Farrar. “While I was looking forward to the reunion aspect of working with those guys, it just wasn’t meant to be. It’ll be liberating to get down to work with a different group of musicians. I had always envisioned Son Volt as a vehicle for my songwriting and expected it to evolve over the years. When I reformed the original band this year to record our track for Por Vida [the Alejandro Escovedo benefit album (Or Music)], it seemed like we might be able to extend that two-day session into two years of recording and touring--but it doesn’t look that way now.”
Collaborating with Farrar on these new sessions are Brad Rice (guitar--Tift Merritt, Ryan Adams), Andrew Duplantis (bass—Jon Dee Graham, Meat Puppets, Bob Mould), Eric Heywood (pedal steel—Son Volt, Calexico) and Dave Bryson (drums—Canyon). Fans had access to these sessions through web cameras installed in the studio beginning October 12, providing a very rare glimpse into Farrar’s recording process as it actually unfolds. During the two week recording period, there were 15 million hits on the site!