Yesterday started off like any other day. The alarm rang at 6:30, just three hours past when I finally fell asleep. Two cups of Black Sheep coffee later, I made my way to my office.
I had just finished payroll when the phone rang. It was Amanda, one of the more annoying employees at our east side location..
“Scott, it’s crazy around here.”
Yeah, sure. This is a woman who proudly wears shirts advertising unknown small-town dirt track racers. Shopping at Wal-Mart and singing awful Lorrie Morgan songs is considered excitement in her dreary life.
She continued on, much to my boredom. “There’s a protest going on next door. There’s people picketing, and some radio guys are here. KSFY just pulled in. And there’s a girl in a bikini.”
I yawned, waiting for her to end her tale, when that last sentence struck me right in the face. Girl in a bikini! “Amanda, I’ll be there in a few minutes.”
Three or four minutes later, I enter the parking lot. Where’s the hot chick? I see the morons from that awful radio station, The Wolf, mounting a counter-protest with signs and costumes that made no sense. On the other side of the entrance, I see a couple of other dudes holding signs.
Then I saw my goddess.
Ok, she looked a little ridiculous in her chicken feather headdress. But there was no mistaking her natural beauty – I’d say she was about 25, probably was a size 4, and she had eyes that could melt any known (and unknown) substance. Clothed in a yellow bikini, her legs, stomach, and breasts were perfect.
I had to get a closer look. I hopped back in my Jeep and pulled around to where she was waving her “KFC Tortures Chicks” sign. “Hey, can I take a picture for my website?” I asked. 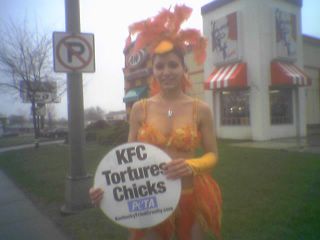