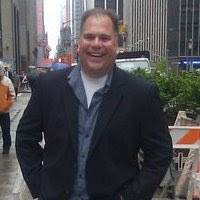 Many, many months ago, I was shocked to find out that Argus Leader outdoors/conservation journalist Thom Gabrukiewicz was a fan of The Ledge. How could it be possible that a person who writes about huntin’ and fishin’ for a living be a fan of my silly music choices? Hell, he even wears a cowboy hat on his twitter profile pic!
Once I discovered that he indeed was a good member in standing of the Obscure Hipster Music Club, I just had to get him to cohost a show. For the longest time, we discussed making this happen. When Gabrukiewicz resigned from the Argus Leader, though, the deadline for this opportunity made this a giant priority.
Finally, Thom made it into the Paulisded Studios, and we spent two hours listening to music while drinking from the giant Crown Royal bottle that Craig Ellerbroek presented me when he made his Ledge appearance a few weeks ago. Besides music, Thom and I also chatted about his lengthy career in journalism, his various writing projects, and his upcoming move to New York City to pursue his dream as a “real” writer.
Thanks, Thom for a great show, and best of luck in the future. For more information on Mr. Gabrukiewicz, check out his blog at http://www.gabrukiewicz.com/. As always, the show can be found at http://theledge.mevio.com, downloaded directly here  and it will also be streamed at http://realpunkradio.com this Friday at 5 pm central time.
Here are the tunes he selected for this episode:
1. The Easybeats, Friday On My Mind
2. Sweet, Ballroom Blitz
3. The Knack, Good Girls Don't
4. The Velvet Underground, Rock and Roll
5. Iggy & the Stooges, Search and Destroy
6. Buzzcocks, Boredom
7. The Damned, Neat Neat Neat
8. The Clash, The Magnificent Seven
9. Elvis Costello, Radio Radio (Live)
10. Stiff Little Fingers, Gotta Gettaway
11. Social Distortion, Backstreet Girl
12. Angry Samoans, Lights Out
13. Black Flag, Slip It In
14. Dinosaur Jr., Over It
15. Dillinger Four, Doublewhiskeycokeonice
16. The Pixies, Bone Machine
17. Liz Phair, Flower
18. Hold Steady, Our Whole Lives
19. Titus Andronicus, A More Perfect Union
20. Replacements, Within Your Reach
Email Post
Labels: The Ledge