It was around the time of the demise of the Replacements that I made my initial forays into the online world. Armed with a state-of-the-art 56k modem, I patiently waited...and waited some more...for primitive text-based web pages to load. There were no streaming videos or audio tracks. A small picture would even dramatically slow down the process. 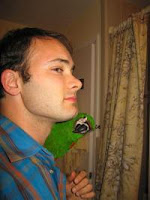 Most of my online activity at this time took place on Compuserve, a precursor to AOL. It was on that service that I eventually discovered a discussion group devoted to The Replacements. This was an eye-opening experience, as until then I never realized there were other fanatics like myself. This small group of us, which included quite a few people I'm still in contact with today, would discuss anything and everything about the band. Shows we'd seen, our favorite (and least favorite) albums and songs, influences, and other music-related topics. It really wasn't that much different than what still happens today on Kathy Shine's message board at paulwesterberg.com.

A couple of years later saw the introduction of Skyway, an email-based publication that collected various news items and stories surrounding the band and their subsequent solo careers. The publisher of this venture was Omaha musician Matthew Tomich, whose various bands over the years have included The Scaries and Sorry About Dresden. A few weeks ago, he sent out his first new issue in many years, and it was through this nice surprise that I contacted him to appear on The Ledge.

Now based in Malta, Matthew's main priority is in his role as teacher, but this episode of The Ledge shows that he still hasn't lost his passion in music. The overriding theme of his music selections is that there is vital rock 'n' roll still being created in almost every community just waiting to be discovered. Musical geniuses are not just found on giant stages; many rarely move beyond self-released projects burned onto blank CDR's.

It really was a pleasure chatting with Matthew, and the result is the longest episode of The Ledge to date. To hear Tomich's music selections and his commentary, subscribe to The Ledge at iTunes or directly download it  here.

1. The Replacements - Nowhere Is My Home

8. Sorry About Dresden - Sick and Sore

11. I Was Totally Destroying It - Summer State

16. The Exploding Hearts - So Bored

19. The Notwist - One With the Freaks