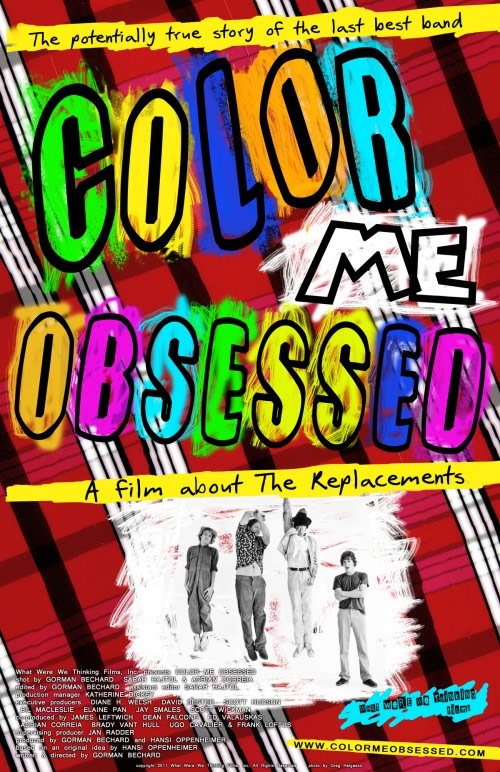 It was nine months ago that I had the pleasure of following author/filmmaker Gorman Bechard and his crew for four days as he interviewed fans and colleagues of The Replacements. Since that wonderful week, I've patiently waited for news on its completion.

Well, the movie is finally finished, and a few days ago Bechard announced the following screenings of Color Me Obsessed:

Saturday, March 26 @ 7:30pm
(World Premiere)
Gasparilla Gasparilla International Film Festival
Tampa, Florida
Buy tickets
Saturday, April 2 @ 6:45pm
Wisconsin Film Festival
Madison, Wisconsin
Buy tickets
Friday, April 15 @ 6:30pm
Chicago International Movies and Music Festival
Chicago, IL
Buy tickets
Wednesday, May 4  @ 6:00pm
Sound Unseen special screening
Minneapolis, MN
Buy tickets
June 13-19 (exact time and date TBA)
NXNE
Toronto, CA
Tickets TBA
It's probably obvious that I will be at the Minneapolis screening!
With the premiere just days away, I felt it was time for Gorman to return to The Ledge studio to talk about the movie, the upcoming screenings, and to also share some of his current fave releases. The second half of the show includes music from some of the artists interviewed for the movie.
To hear my conversation with Bechard, you can click on the iTunes logo on the left to subscribe, or directly download it here.
Here's the playlist for this show:
Intro
1. The Replacements, Seen Your Video
Gorman's Current Playlist
2. Lucinda Williams, I Don't Know How You're Livin' (Kitchen Tapes Version)
3. Amanda Palmer, Fake Plastic Trees
4. Ida Maria, Let's Leave
5. Mumford & Sons, The Cave
6. The Rural Alberta Advantage, Good Night
Selections From Artists Interviewed for Color Me Obsessed
7. Archers of Loaf, Underachievers March and Fight So
8. Superchunk, Learned to Surf
9. The Neighborhoods, Pure and Easy
10. Berrence Whitfield, Rockin' the Mule
11. The Bristols, Another Boy
12. Babes in Toyland, He's My Thing
13. Goo Goo Dolls, Just the Way You Are
14. Husker Du, Chartered Trips
15. The Del Fuegos, Don't Run Wild
16. The Figgs, Wasted Pretty
17. Jesse Malin, Don't Let Them Take You Down
18. Matthew Ryan, 3rd of October
19. The Decemberists, Oh Valencia
20. Deer Tick, Houston TX
21. Gaslight Anthem, Tumbling Dice
22. The Hold Steady, Your Little Hoodrat Friend
23. Titus Andronicus, My Time Outside the Womb
24. Bill Janovitz, Little Mascara
Email Post
Labels: The Ledge