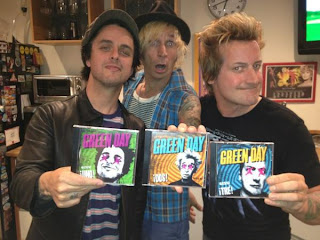 Next Tuesday, Green Day will be releasing their first album in three years. Uno! is the first shot of a trio of discs that will be coming out in the course of the next four months, and the pre-release hype claim that it is a return to the glory days of Kerplunk and Dookie.
Having obtained an advance copy, tonight's Live Ledge includes six songs (half the album), and these tracks include two of the best ("Nuclear Family" and "Let Yourself Go"), two of the worst ("Kill the DJ" and "Troublemaker"), along with two tracks ("Sweet 16" and "Fell For You") that definitely fit the claim that the band was going for a sound similar to Cheap Trick. I'm also joined by Big Brother Gossip Show cohost Ash Masters  for additional commentary. The consensus? You'll have to download this to find out.
Besides the Green Day tracks, tonight's show also includes new material by Natural Child, The Soft Pack, Corin Tucker, and a couple of tunes from a Repo Man tribute album.
Grab this fun show from the usual suspects or...