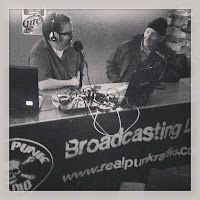 If you follow me on various social media, you were bound to already be tired of my self-promotion for this very special episode of Live Ledge. Being that it was my 100th Friday night broadcast, I wanted to do something special. Thanks to my fellow Argus Leader cohort Cory Myers, we were able to convince Falls Landing to allow me to attempt a broadcast from that wonderful bar.
It turned out to be a lot of fun. While this recording from that night may be a bit rough, and I did have a whiskey or two (and a shot of bourbon, thanks to Barb and Jess), it was a great night of playing nothing but the cornerstones of the whole Ledge series. One can predict the vast majority of tunes that I aired, but I also included a couple of sets of vintage Sioux Falls rock 'n' roll classics.
The best part of the night, though, was the number of faces I haven't seen in years. I even met a few "friends" in person that I had only known in the past via social media. Thanks to them, and everybody else who showed up, for making this a great night. We may do this again!
Grab this treasure from the usual sources (iTunes, Stitcher, my Ledge app), or...