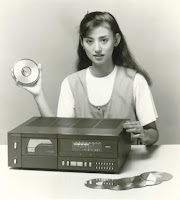 Ok, I'm an idiot. We can all agree on that. Tonight's theme, though, may have been one of my most idiotic...but I have an excuse, and it turned out for the better.
Earlier this week, Slicingeyeballs commenced on a poll to come up with the best album of 1982. I immediately jumped straight out of my chair and decided that this would be a perfect format for a show!
Sure it would be...last year. Which I did. To do a 1982-themed show in 2013 is idiotic, though. Unfortunately, that lightbulb didn't come on until after I had pulled 40 or so potential songs for the show. So I decided to go with it anyway. I also didn't take a peak at last year's version of the show. I'm sure there are a few duplicates, but I think I can get away with repeating a few tracks once a year. Right? Tell me I'm ok with doing this!
The show ended up being fun, and after a week of falling trees and power lines, it was a nice release. I do talk about the inferno of ice that fell on our city this week, along with a few other topics.
Next week I will have a more properly-timed theme - songs from 1983!!! Contact me with suggestions!
So get this from the usual channels, or...


1. INXS Don't Change
2. The Cure, One Hundred Years
3. Bauhaus, Third Uncle
4. The Psychedelic Furs, President Gas
5. The English Beat, Save It For Later
6. Elvis Costello & The Attractions, Man Out Of Time
7. Lords Of The New Church, Open Your Eyes
8. The Jam, The Bitterest Pill
9. The Fleshtones, The Girl from Baltimore
10. The Nelsons, Sister Sister
11. The Beat, The Kids Are The Same
12. Translator, Everywhere That I'm Not
13. Holly and Joey, I Got You Babe
14. Josie Cotton, Johnny, Are You Queer?
15. The Plimsouls, A Million Miles Away
16. The Replacements, Go
17. Husker Du, Everything Falls Apart
18. Crash Street Kids, Little Girls
19. The Suburbs, Waiting
20. The Business, Get Out While You Can
21. Crass, The Greatest Working Class Rip-Off
22. The Adicts, Shake Rattle Bang Your Head
23. Zero Boys, Livin' In The 80's
24. Fear, I Love Livin' In The City
25. Bad Religion, Fuck Armageddon...This Is Hell
26. Angry Samoans, They Saved Hitler's Cock
27. Dead Kennedys, Bleed For Me
28. Descendents, Bikeage
29. Mission Of Burma, That's How I Escaped My Certain Fate
30. Circle Jerks, Just Like Me