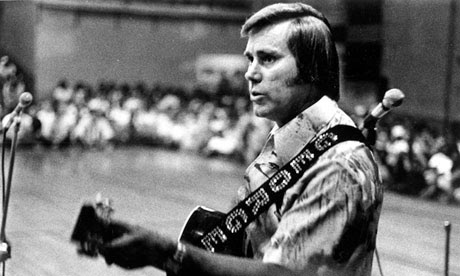 Music fans woke up to tragic news this morning as word came out that iconic country singer George Jones had died at the age of 81. While there is no official cause of death at this time of writing, he had been admitted to the hospital last week with fever and irregular blood pressure.
I could attempt to wax poetic on George's great life, but many others have been doing a wonderful job today that I could never come close to matching. There will also be more ahead in the days to come.
Instead, I did the only thing I could do in his memory. The first part of today's show was devoted to George, and included a couple of his early rockabilly recordings under the name of Thumper Jones. There's also a whole set of cover tunes by the likes of the Nervebreakers and Jason and the Scorchers.
Besides the tracks devoted to Mr. Jones, the rest of the show primarily dealt with various birthdays and anniversaries in music history. We celebrated the birthday of Replacements' drummer Chris Mars, and the 37th anniversary of the first Ramones album. We had a tribute to the 22nd anniversary of the death of legendary guitarist Johnny Thunders. Besides many other sets of that sort, there's also quite a few Record Store Day tracks that didn't fit last Sunday's Rural Ledge-ucation.
Download this one now! It may be the most varied show of the whole catalog! Grab it from the usual sources, or...