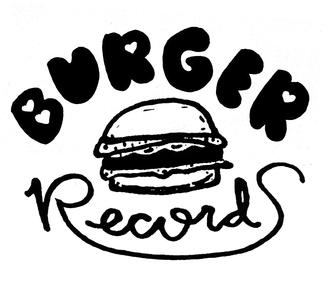 A few days ago, I downloaded the official Discogs app to my phone. Besides being able to find information on various pressings of every release, the app allows one to create their library by using your phone's camera to scan bar codes.
I did nothing but that for the next couple of days, and some surprises resulted from this inventory. First off, I found out that on four ocassions I purchased the same record twice. What a dope. But the more important stat I discovered by looking at the various ways one can look at their library. When grouped by label, I found out that over 10% of my vinyl purchases were from one record label - Burger Records.
Burger was formed around a decade ago by high school friends Sean Bohrman and Lee Rickard. When they started their band, Thee Makeout Party, they creted a Burger Records logo to place on their 7" releases.
At first the label primarily released cassettes, and even licensed out a number of titles from labels that had no interest in putting out tape versions of their indie rock albums. Eventually, they expanded into full-length vinyl, which is where I come in.
While it's hard to describe a "typical" Burger release, for the most part they do share some similar sensibilities. Most of it is extremely melodic, and the vast majority are somewhat lightly produced. From there the sounds start to vary. Most of it has a garage-rock foundation, but many veer off into pscyh and even prog. Most importantly, most of it is great!
Grab this episode from the usual sources, including iTunes and Stitcher, or..