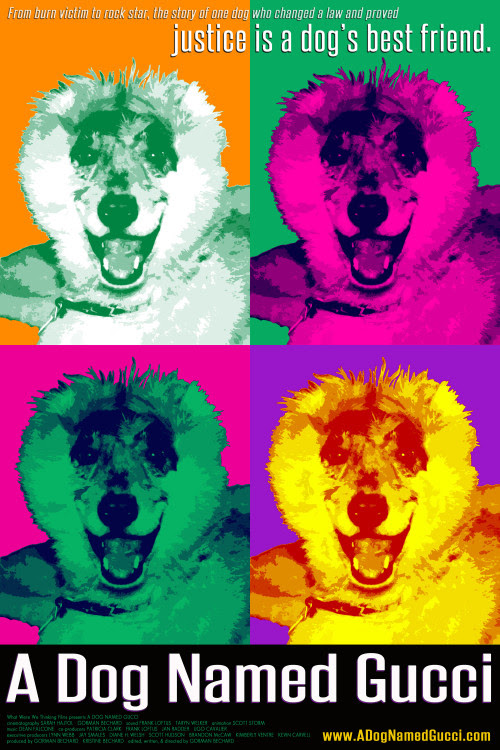 Everybody knows director Gorman Bechard loves rock and roll, but his greatest admiration is reserved for something else. Well, actually there are two greater loves, as his beautiful wife Kristine is certainly at the top of his charts.
But anybody who has spent any time at all with Bechard is aware of his adoration of dogs. Besides being a pet owner almost all of his life, Bechard has long been a loud advocate for stricter laws against those who do anything to hurt them. (In other words, never get him started on NFL quarterback Michael Vick.)
In 1994, Alabama professor Doug James was chatting with a neighbor when he noticed some teens setting a puppy on fire. James rescued the dog, and after his recovery from multiple surgeries "Gucci" became the face of a mission to change the animal abuse laws in Alabama.
When Bechard became aware of this case, he immediately knew this was to be his next documentary. Along with Gucci's tale, "A Dog Named Gucci" tells the tales of beautiful canines such as Susie, Louis, and Nitro. Each of these dogs suffered through horrific acts, but each of them also led to legislative action.
After hitting the festival circuit, "A Dog Named Gucci" will be available for purchase next Tuesday (4/19). This special edition also includes over two hours of extra features. Bechard sat in on most of tonight's Live Ledge to chat about the film, and also provided some updates on future screenings of "Who Is Lydia Loveless?" As always, Bechard picked a handful of his current favorite tunes, and the second half of the show is devoted to "dog" songs.
You can nab this show via the usual sources, including iTunes or Stitcher, or...

Anonymous said…
All the podcasts with Mr. Gorman Bechard are world class. I can feel a complicity with Scott during every shows. I enjoyed the docs about the mats and about the wild one. I ordered "A Dog Named Gucci" after hearing "The Ledge #237".