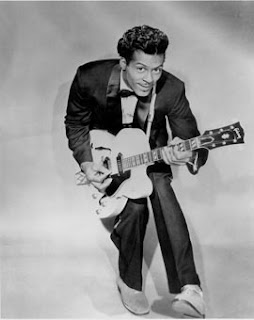 It was in the middle of the afternnon this past Saturday when a tweet appeared in my timeline stating that Chuck Berry had died. After verifying that was the case, I went into a deep period of mourning. I pulled out my Great 28 compilation and played it on repeat all day long. I wrote a little column about his death, and then spent the weekend reading story after story.

I'm still pretty shook up about it.

It's not so much Chuck's death that has me rattled. He was 90, after all. He lived a full life. This wasn't a sudden death like Prince or Bowie last year (yes, I know Bowie had been ill for quite some time but that was kept secret).

I was upset because in my mind Chuck Berry is the true father of rock and roll. Sure, there were people that came before him, and Elvis was surely a bigger star. But the vast majority of music I love and listen to every day originated with Chuck's prime of 1955-1960. Every guitarist I love was a son of Berry, whether they knew it (or admitted it). He wrote his own material, and somehow this 30 year-old African American was able to tap into the angst of teenage America (and beyond). It's impossible to downplay his role in the rise of the musical movement that has shaped my life.

Proof of how influential he was is the ease in putting this show together. I started off by simply typing each and every song title from the Great 28 into my iTunes and choosing which version I wanted to air. This was augmented by doing the same thing with other important songs from Chuck's career. A couple of websites devoted to cover versions then helped plug a couple of holes.

What you're going to hear tonight is not necessarily the "best" Chuck Berry covers. In fact, you're not necessarily going to hear an individual band's best Berry tunes. Case in point is the Rolling Stones. It would have been really easy to play the two essential live cuts included on Get Your Ya Ya's Out (Carol and Little Queenie). But those are songs that have been covered by so many others, so later on you'll hear some lesser known tracks played by the "greatest rock and roll band in the world".

This almost 2 1/2 marathon turned into a show I'm immensely proud to have put together. I firmly believe it shows how Berry impacted multiple generations of musicians, and will continue to be a well that guitarists and songwriters will use as a template for future rock classics.

Like every other episode of Live Ledge, you can grab this at iTunes or Stitcher, or...