My Day With "Sgt. Pepper" 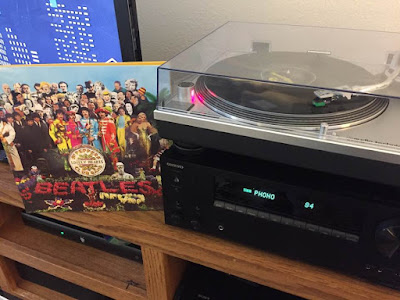 “Sgt. Pepper” may be the most critically-acclaimed record ever released.

Yet it’s not the best Beatles album. In fact, it barely makes the top five. “Rubber Soul”, “Revolver”, and “The White Album” are better records. A strong case can also be made for “Abbey Road”. Personally, I’ll put “Help” above it, and on certain days I’ll even prefer “A Hard Day’s Night”.

“Sgt. Pepper” is, however, the band’s most important achievement.

How is that possible? If it’s not their magnum opus, how could it possibly of any greater significance? Simple. It changed the concept of what an album represents or how it’s created. An album was no longer just a collection of 10-14 songs randomly tossed together with little thought to ebb and flow.

“Tommy” would not have existed without “Pepper”. Nor would “Dark Side of the Moon”, “Born to Run”, “London Calling”. Beyonce’s “Lemonade” was created as a real album, which is precisely why she’s in a different world than the vast majority of today’s pop stars.

Of course, the other side of the coin is that without “Pepper” we wouldn’t be plagued with Emerson, Lake, and Palmer triple albums. Or prog rock in general. But that’s an argument for another time.

Besides the actual music on the record, “Sgt. Pepper” changed how albums were packaged. There were no gatefold packages before this album. Lyrics were never printed, nor were there inserts. No cover had ever cost as much.

Obviously, with this year being the 50th anniversary there was no doubt that Apple would do something to celebrate. But what exactly? Outside of the “Anthology” series, The Beatles have always been pretty stingy with their archives. The reissues of a few years ago featured no bonus tracks, even though bootleggers have provided fans with hours and hours of alternate takes and other studio rarities.

Yet for the first time, the band have given the ok to raid the vaults. The regular edition of the new reissue features a second disc that reimagines the record using nothing but outtakes, while the deluxe box set includes two CD’s of this type of material.

Naturally, that’s where my main interest lies, and is what I focused on for the first couple of days. For the most part, these outtakes are the bare-bones band tracks before various overdubbed effects. The title track and reprise are fully-realized as real rockers. “Fixin’ a Hole” and “Good Morning Good Morning” are punchier.

Multiple versions of some of the more elaborate tracks provide a look at how they were created. One can see how the legendary two versions of “Strawberry Fields Forever” differed, and how they were brought back together. There’s also some interesting experiments with the final chord of “A Day In the Life”, along with the isolated orchestral overdub.

It’s all great stuff, but there’s a couple of notable omissions. “Strawberry Fields Forever” and “Penny Lane” are included because they’re considered part of the Pepper sessions but George’s “Only a Northern Song” isn’t. The legendary “Carnival of Light” still has yet to see the light of day, and it’s ridiculous that it’s not a part of this package.

“Carnival of Light” is an experimental track that the band recorded on January 5, 1967 for use at an event in London. It’s reportedly nearly 14 minutes long, and has yet to appear on any bootlegs. Paul McCartney had originally intended for it to finally be released on “Anthology 2”, but George Harrison refused to give his ok. It’s a missed opportunity.

Besides the outtakes, the new “Pepper” includes an element that raised a few eyebrows when it was announced earlier this year. Beatles producer George Martin’s son, Giles, has remixed the album. Wait a second! Isn’t that sacrilege? How was this allowed to happen?

That was my feeling for quite some time until I started reading some of Martin’s interviews. It should be noted that even in 1967 mono still ruled the world. Stereo was an afterthought. In the case of “Pepper”, the and reportedly spent three weeks with Martin on the mono mixes, and then left Martin alone for the stereo mix. This was accomplished in three days.

Martin has made his case in many interviews that he used the mono mixes as the guide to create this new stereo mix. “She’s Leaving Home”, for example, is the slightly faster and semitone higher version featured on the mono version. Other changes were more of his own idea. “For ‘Lucy in the Sky With Diamonds’”, Martin recently told Mojo, “I had this idea of chopping up the keyboard notes so they could be spread across the stereo spectrum...then I can have the voice in the center, because I have this stereo keyboard underneath”. Hmmm.

While that may sound like a radical change, it’s still the “Pepper” we know and love. I spent almost a full day listening to the new mixes on vinyl and CD, along with the 5.1 surround sound version on blu-ray. If the idea really was to create a stereo version of the mono mix, I’d say Martin succeeded. The overall feel of each and every song is the same, but current technology has helped create a fuller sound. Starr’s drums truly “pop” from your speakers, and you can hear every note from McCartney’s bass. Of course, a skeptic could say it’s a bit predictable that the surviving members of the band benefit from the new mix.

Overall, this is an extremely well-done package. No fan of the band can possibly be disappointed or truly outraged. Hopefully, this is also a sign of things to come in the future. How about a “White Album” that includes the legendary “Esher Demos”? Or a “warts and all” box set of “Let It Be” that includes not only the hours and hours of early r&r covers but some in-studio disagreement? Yeah, I wouldn’t hold my breath on that one.
Email Post
Labels: Beatles scott hudson sgt. pepper