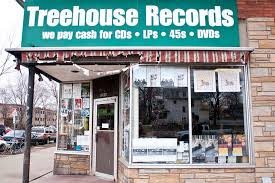 One of the worst cliches of music-oriented movies involves a band receiving their big break after slipping a record label a demo tape. I’m not going to say it never happens, but it’s pretty safe to say that it has happened in more movies than in real life.

It’s not that bands don’t try, though, and it’s not just record companies that used to receive unsolicited recordings. In fact, when a Minneapolis record store was handed a cassette tape almost four decades ago it changed the course of the city’s music history.

Hoping for a club gig, Replacements leader Paul Westerberg stopped at Minneapolis record store Oar Folkjokepus with a tape that he handed to clerk Peter Jesperson. Having recently started a little label called Twin/Tone, Jesperson quickly signed them up and also became their manager.

Since then, “Oar Folk” became synonymous with the Minneapolis music scene, as did the bar across the street, the CC Club. In 2001, the store was purchased by longtime manager Mark Trehus and renamed Treehouse Records.

Regardless of the name, the store has always been my favorite Minneapolis record store. It was part of my Minneapolis routine to hit the store shortly after hitting town, and then wetting my whistle at the CC Club. Over the years, I made a few friends at the store, and it was always touching that even though I’d only make it to town a handful of times per year they seemed to know who I was.

Sadly, it was announced today (May 6) that the store will be closing at the end of the year. Rumors began to swirl a bit when an appearance by The Suicide Commandos was being billed as the store’s “last in-store”, and shortly after Trehus announced on Facebook:


"I chose the first-ever live Oar Folk or Treehouse performance of my favorite band, the Suicide Commandos, to announce that it will be the last-ever in-store performance at Treehouse Records. I am retiring. The store will close forever on December 31st, 2017. Treehouse shoppers who spend $25 or more on store merchandise between now and a too-be-specified future date can sign up at the store for a special event that will be the last Treehouse-sponsored show."

It’s a sad day for Minneapolis music fanatics, but I wish nothing but the best for Mr. Trehus.
Email Post
Labels: minneapolis scott hudson treehouse records