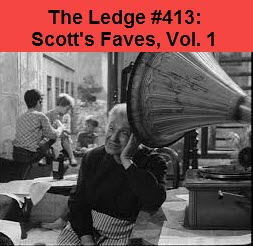 A few days ago I came up with the idea of putting together a show of nothing but my favorite songs of all time. A few hours later, however, I ended up with a folder of almost 200 songs. Hmmmm. So here is the introduction of a new series of shows devoted to the great tracks that have made me who I am today.

Of course, a lunatic like myself has to come up with unnecessary rules. So the main rule I'm abiding by in this new Ledge series is that I'm going to ignore most of the obvious bands. Everybody knows I love Chuck Berry, The Beatles, The Rolling Stones, The Clash, David Bowie, and other similar giants. And how would one just pick a single song by acts like these?

So for the most part we're going with artists that should be bigger. Artists that should be on every so-called "classic rock" playlsit. Of course, The Kinks are one of those kind of bands, but how can I ignore "I'm Not Like Everybody Else"? So it's a part of tonight's show dedicated to tracks primarily from the 60's and 70's.

I'm excited to exhaust the folder of tunes I have created for these shows. Future episodes will focus on Americana, power pop, 80's college rock, and there may be an entire episode dedicated to Minneapolis and Sioux Falls bands!