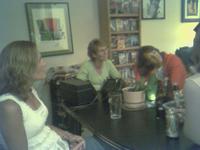 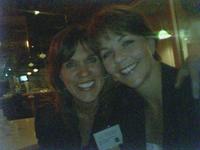 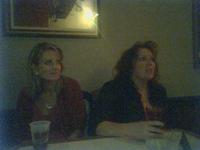 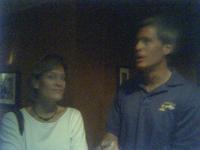 I'm not a very nostalgic person, but I must admit that I had a great weekend with my old college friends. Well, some of my college friends...mainly of the female persuasion (which is fine with me). For some reason, most of the dudes I hung out with back in the day were too busy to attend. And the ones who did show up in town obviously don't wear the pants in their family, as they felt it was all right to forget about their old buddies and return to their hotels (I'm talking to you, Mr. Hanson).
So I spent the entire weekend in the presence of women. The story begins a couple of weeks ago when the beautiful Morgan sends me an email stating that I was having a party on Friday night. Uh, ok. That works for me, I guess.
Yes, it did work for me. Besides Morgan, I was graced by the presence of Kelly, Jen, Janet, Jan, Amy, Michelle, Kim, and Kauline (although Jen's husband did show up later). Plenty of whiskey, wine, beer, and pizza were consumed...and I must admit it was like we'd all seen each other last week.
I opted to skip the silly parade the next morning in favor of sleep. In fact, I had some thoughts of skipping the entire day (wouldn't that be a typical Hudson move?). After hearing the pleas of a couple of pals, I decided that I would attend.
Again, another pleasant surprise. After a few minutes of feeling slightly uncomfortable (and a Windsor/Coke or two), I was babbling to anybody and everybody.
There were quite a few surprises - seeing the DeSpiegler family, Keith (Head) Hanson's monster of a five-month old baby, the sexier than ever Deb Peterson.
When the Minerva's get-together concluded, everybody was separated. Instead of my friends from Friday, I found myself hanging out with Kayla, Beth, and Sena. We wandered up and down Phillips, hitting every bar at least once (Stogies was one we ventured into twice). We also convinced a hotel bar to let us in after hours for a couple of beers and shots. I finally grabbed a cab around 3 o'clock.
The big surprise was the emptiness of Skelly's. Once one of the crown jewels of the downtown drinking scene, the bar was almost completely empty at 11 o'clock on a Saturday night. What happened to this place? Every other bar was close to capacity.
It was a great night, and I hope it leads to more good times with old (and new) friends.
Email Post