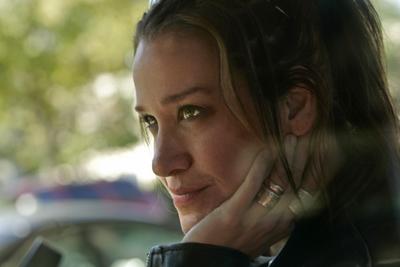 Ah, the exciting life that alternative music queen Mary Lucia must live when she's not on the air at the Current (89.3 FM), the eclectic, noncommercial radio station that's taken the Twin Cities by storm. The concerts, the parties, the musicians, the 24/7 lifestyle. ...

The glam fantasy sets off the trademark Lucia laugh, a warm, deep chuckle utterly familiar to a devoted fan base that wouldn't think of missing her personality-filled music show from 3 to 7 p.m. on weekdays.

"Actually, I don't get out much," she confessed. "I have a friend who lovingly refers to me as 'Anne Frank.' I work a ton and then I come home. I love my house. I love my books and I love my three cats. I aspire to be that cat woman."

Lucia, 36, had agreed to forsake her felines for a few hours on a brilliant fall morning. As she sat basking in the sun at Java Jack's, a south Minneapolis hangout, the witty brunette reviewed - with no small amount of humor - a career that now has her perched in the catbird seat at a station backed by the considerable resources of Minnesota Public Radio. Unlike the commercial alternative music stations where she previously worked, the late, much lamented Rev 105 and, later, Zone 105, the Current appears to have some staying power.

The Minnesotan was studying theater at New York University in the mid-'90s when she first heard about plans to start Rev 105 in the Twin Cities. She was ready for a change. "I just hated actors so much - all they ever talk about is Acting - and all I wanted to do was go to a rock concert."

She moved back to town and miraculously persuaded Rev's program director to hire her, although she had no radio experience. "It really was magic. Everyone had the exact same goal: to have a ball, make really good radio and support local community and music."

Lucia's easygoing radio personality, intelligence and musical taste brought her instant attention, not only from listeners, but from local ad agencies. They snapped up her dulcet tones for voiceover work, which continues to support her comfortably.

After the Rev's demise, she worked at Zone 105 as a morning host with Brian Oake. "Normally, the shtick is that the woman is an idiot and the man takes advantage of her," Lucia said. "But Brian is one of the most enlightened men on the planet, so it was like coming into work every day to talk to my best friend, read the newspaper and get paid."

But Zone tanked in 2001, and for the next three years, Lucia contented herself writing a monthly column for the Rake magazine, doing voiceover work and a little acting (she played a lawyer in a local indie film, "The Last Word").

"I figured I was done in radio. I'd rather drive a railroad spike through my head than play the Grateful Dead ... sorry."

Her attitude changed when she heard about the Current. "I shot [program director] Steve Nelson an e-mail that said, 'Dude, you know I'm not dead and I'm not under a bridge drinking Scope - yet.' "

When the station was launched in January, the music library consisted of "13 CDs on a shelf, and two of them were Johnny Cash. So we all came from home with armloads of our own stuff and that's how we went on the air."

The station's personality-driven format is especially welcome to her. "I love that you can turn on the radio and know who's on, based on the sound. I really love to rock. I enjoy glam rock and odd pop rock that I think a lot of people would be incredibly embarrassed to say they like. But I don't care if it's music from the Partridge Family, it will sound really fresh when I put it next to something brand new."

You won't find her playing "electronic music, alt country or 'baby woman' music - an adult woman singing like an infant."

The Current's active online use has been a challenge. "That community is so strong you're literally being critiqued as you go. In what other job can you say something dumb and immediately 50 people write, 'She's so stupid'? I played Foghat's 'Slow Ride' the other day because I thought it needed to be heard, and people were immediately stirred up."

"It's one song. Go make a sandwich and come back; you'll love it in five minutes."