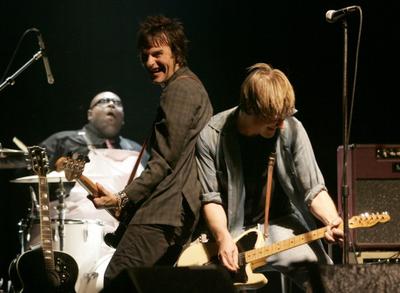 Concert review: A revitalized Soul Asylum is all there in spirit -- and then some
Jon Bream, Star Tribune

You say "replacement," I say "renewal."

"Replacement" was on everybody's mind as Soul Asylum returned to the stage Monday night at First Avenue for the first time since founding bassist Karl Mueller died of cancer in June. Indeed, Tommy Stinson of Replacements fame made his debut Monday night with Minneapolis' biggest band of the '90s.

After a mere three days of rehearsal, Soul Asylum sounded renewed and revitalized. It was partly because the 80-minute set included several new songs from a CD recorded with Mueller that is slated for a winter release. It was partly because lead singer Dave Pirner and lead guitarist Danny Murphy are finally ready to move on. And it was partly because Stinson and powerhouse drummer Michael Bland, who'd signed on a year ago, kicked the butts of Pirner and Murphy, who have been rocking together since 1981.

"How 'bout this bleeping rhythm section?" Pirner asked the nearly 500 fans. "I can't tell you how lucky I feel to have these guys with us tonight."

That was an understatement. The arrival of Stinson, whose rock 'n' roll personality disguises what an underrated pro he is, and Bland, the diesel that drives this runaway rock 'n' roll train, has transformed Soul Asylum from a good band to a potentially great one. It's also an historic quartet, featuring members of three of the Twin Cities most famous rock acts -- Prince, the Replacements and Soul Asylum.

There were some amazing moments on Monday, especially a piledriving rendition of "Somebody To Shove" which brought visions of Stinson in vintage Replacements, Bland in his Prince days and Pirner and Murphy in their full punk-pop f ury. Some new numbers also stood out, notably the edgy, intense "Bus Named Desire" and the night's final tune, a surging, full-throttle rocker about weapons of mass destruction.

A couple of the new tunes raised a skeptical eyebrow, namely the acoustic-driven heartland rocker "Standing Water" and loud, Brit-like "Oxygen." But to see Pirner, 41, carrying on with the joy of a 20-something punk was as reassuring as it was exciting. He was clearly having a wonderful time, egged on by the fun-loving spirit of Stinson, who isn't one to just stand there and stoically play bass like Mueller did. The rooster-haired Stinson -- the Los Angeles resident who still ranks as one of Minneapolis' great rock characters ("I know I don't have to introduce him," Pirner said before introducing him) -- carried on like the rock star he is. He windmilledhis right arm, climbed on Bland's drum kit, seized the mike to declare that one tune "was very nice" and jammed face-to-face and back-to-back with Pirner like they were a couple of kids playing their first rock show. 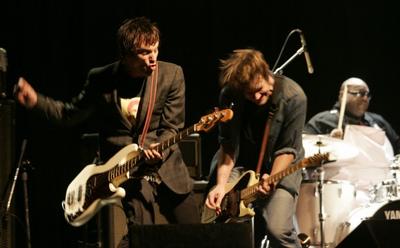 Despite the fun, Pirner did get emotional at one point. He said he wanted to dedicate this show -- and every show -- to a "friend who is here in spirit." He then led a chant of "Kar-rul, Kar-rul" before easing into "Crazy Mixed Up World," a quieter, tuneful new piece that was sentimental and questioning at the same time.

The historic evening, a tuneup for gigs this week in New York and Memphis, got off to a crazy, mixedup start. The band was supposed to have performed at the tiny, sold-out 7th Street Entry, where new bands typically start out. But there were problems with the sound system during the opening act's set, so shortly before Soul Asylum was slated to take the stage, the show was moved next door to the more spacious First Avenue. That the band, without a soundcheck, was able to quickly adapt to the situation without any hitches was further testament to Soul Asylum's spirit and will to move on.
Email Post