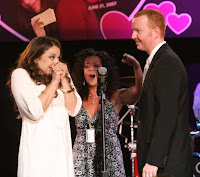 Shortly after I signed on to XM radio a few years ago, I was introduced to a video networking service called Paltalk. Every day, dozens of us would gather to listen to the programming on channel 202, and would linger there long after the conclusion of the day's shows. One of those fine folks was Casey McDonald, who I grew close to partly because of her love for music that was unlike the vast majority of the 202 crowd.

Casey eventually met and married Ron and Fez producer David McDonald, and the pair invited me into their home three summers ago when I made my first (and so far only) trip to New York City. When I first started The Ledge, Casey was a person that I felt needed to be on the show, and this week she brings some of her favorite reggae and hardcore tunes. Besides the music, we talk about her days as a record store manager, her on-air wedding to Dave, and, most importantly, the medical issues surrounding her beautiful son, Stan.

To hear the show, head to theledge.mevio.com, download it here, or tune in to realpunkradio.com this Friday at 5 pm central time.

6. Phyllis Dillon, In the Ghetto