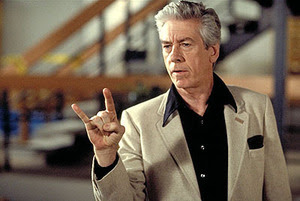 In the six months that "Your Man" Mike Huether has been Mayor, he's been prone to make plenty of tough guy statements. Unfortunately, they come off like Principal Vernon in The Breakfast Club. You know, the guy who thinks he's completely in control but is openly mocked by all of his subjects?

Today's paper had another example of Huether's silliness. In a discussion on the plan to move the downtown railroad switching yard, which is finally going to happen five later than expected, Huether informed the City Council that there oversight is not needed:

Huether told the council it's his administration that's managing the project, not the council.

"Just to be clear, the executive branch of government versus the city council is responsible for this project," said Huether.

"I want to keep the city council involved, but guess what? We are already doing it."

After the meeting, Councilor Michelle Erpenbach said the mayor's comments were "out of line."

You think? C'mon Mayor Mike, you ran on a candidacy of kindness and open government...which you have spit on the face of the populace ever since. Maybe you're correct in that the Council has no legal basis to be involved, but couldn't you be just a bit more diplomatic?
Email Post
Labels: Huether

Anonymous said…
We've covered this issue before, remember? Sioux Falls voters in the '90's opted for a 'strong mayoral/weak council' system of government. Huether CAN get away with giving the Council the brush off on this matter.
If you're going to discuss political issues in public, you need to understand the underline city charter that weasel Huether understood before running for office. This is why he kept his event center plans a secret to begin with. While running for office he never provided specs on anything. Regime change sucks when it's just another dictator exchanged for another in the land of lemmings.
Kurt the Troll.
10:14 PM