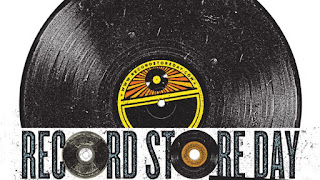 It's probably no surprise that I love Record Store Day. What's not to love? It's the one (actually, one of two) day of the year that almost everybody in the area with a similar dysfunction gathers together to put a dent in their wallet.

It's such a joyous occasion that I sort of drop the curmudgeon motif for a few hours. I'm downright chipper! And I actually talk to other people! That's certainly not the Scott you love.

As much as I enjoy the couple of hours that I'm a social butterfly, I still have quite a few criticisms of the event. (Yep, that's the real Scott coming back to entertain you.) One problem is the sheer glut of junk that the record labels put out. Most (but not all) picture disc releases are worthless. Many releases that should be out as relatively cheap 7" singles are nonsensically produced on 12" records, and priced accordingly. There's also tons of regular reissues that really could come out at any time during the year.

But there's a bigger problem associated with Record Store Day, and that was evident in the two lines that I spent some time in this morning. Obviously, most people don't really know how the ordering process work. They believe that anything and everything that's on the official Record Store Day site is available to all retailers at any quantities.

While you may think that this misunderstanding matters little in the grand scheme of things, it's actually the event's biggest downfall. When customers at both stores say things like "I know (album X) won't be here because this store doesn't sell that kind of music" it creates an image issue that's not the store's fault. I've heard similar commentary every year. Will these people return to the store outside of Record Store Day? Doubtful.

The odds are that the stores indeed try to stock whatever that person was hoping to find. Regardless of genre, all of the stores in this city attempt to get in all but the most ridiculous releases. But in typical record company fashion, the labels don't care about the actual demand. They just care about being able to get the Pitchfork or Rolling Stone mention that so-and-so has a limited edition set for this day. Every year a good portion of the most highly-publicized titles are not seen around these parts.

Even those that do make it to retailers don't arrive in desired quantities. All three stores (Ernie November, Total Drag, and Last Stop) informed me that almost universally they received a fraction of the ordered quantity. Most of the time only one or two arrived no matter how many they ordered.

Can you see how this can cause confusion and frustration? Even without this knowledge, you would have to acknowledge that our local stores would like their RSD stock to last more than the first 15 minutes or so that the store is open.

Again, let's remember that I love Record Store Day. This isn't just an ornery old man whining as he generally does from day to day. I'd like to see improvements in how it all works, especially as the vinyl love is continually expanding to include not only music nerds but younger folks who have never owned a CD. Instead of stealing files, they're back in the stores and actually buying new and old music.
Email Post
Labels: commentary record store day