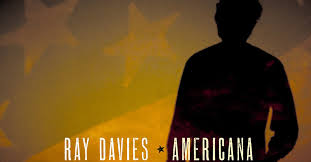 With today's release of Ray Davies' new album, Americana, it seemed a bit obvious to put together a Kinks show. Unfortunatley, I had already aired a Kinks tribute show almost five years ago. Live Ledge 77 was a response to my anger over the fact that NBC went to commercials just as Ray Davies was about to perform "Waterloo Sunset" during the closing ceremonies of the 2012 Summer Olympics. I'm still mad about that.

That episode took away a good portion of possibilities for tonight, as I'm not a fan of duplicating myself. (Click here to read more and/or listen to that episode.) Luckily, almost everybody at some point has covered the Kinks so it was no problem to put together a show featuring the likes of the Jam, Pretty Things, Alex Chilton, Ty Segall, and the Pretenders. I could probably do another show in the future without having to return to any of these selections.

The first part of the show, though, is utilized to sample a number of tracks off Ray's great new record. A soundtrack of sorts to his book of the same name, the tracks on this album deal with his experience of living in the U.S. over the last few years.

He's ably backed by the Jayhawks, one of the great Americana bands of the last 30 years. Since they've also been utilized by artists such as John Wesley Harding and Joey Henry, it was fitting to also dedicate a set to their work with those artists and also on their own.

This is quite a fun show, and I think any rock and roll fan can find something they enjoy. It's really a testament to the songwriting genius of Mr. Davies. He's one of the few songwriters whose songs can be ably performed by acts that specialize in folk, punk, country, and even metal.

Grab this from the usual sources, including iTunes and Stitcher, or...