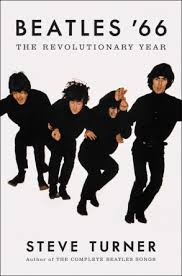 There are a handful of artists whose career has been so documented that a new book seems like a pointless venture. What can possibly be said about Bob Dylan, Beach Boys, Led Zeppelin, the Stones, and a few others that haven’t been said before?


Obviously, The Beatles also belong in this category. There have been thousands of books published about the “Fab Four”. Certainly every aspect of their life has been exhausted.


This was the preconception I had when I first opened Steve Turner’s “Beatles ‘66: The Revolutionary Year”. Yet it was within just a few pages that I realized Turner had found an era that deserved a more incisive look.


Turner makes the case that 1966 was the most important year in the band’s career. While in some respects that can be said about every year the band existed, main points that everybody knows creates a valid argument. 1966 was the year they quit touring, and it was the year they created their most ambitious album to date, “Revolver”.


Both of these facts are covered extensively, including the various controversies on their world tour of that year. The entire story of their disastrous Philippines shows is covered, as is the ramifications of John Lennon’s comments comparing the popularity of The Beatles to Jesus.


“Revolver”, of course, changed the way albums are created. Instead of just a collection of quickly-recorded songs, this was the record where the band became recording artists. Tape loops, odd instrumentation, backwards tapes, and even a few outside musicians were utilised.


Yet Turner says that it was the first few months of the year that makes 1966 so important (and ultimately led to both “Revolver” and the decision to cease touring). After “Rubber Soul” hit the shops in late 1965, the band took their first extended break since their vacation. While they still socialized in various combinations, each Beatle went their own way. Paul became immersed in the London art scene. George got married and studied his beloved sitar. John spent maybe too much time experimenting with LSD. Ringo...well, he just remained Ringo.


This was really their first opportunity to develop their own friends outside of the Beatles, and their tastes definitely evolved. Again, this isn’t exactly undocumented news, but instead of just a few pages in a typical Beatles biography, Turner goes deep. He chatted with many of these newfound friends. He describes the various new influences each Beatle tapped into during this time, especially Paul’s flirtations with underground art and literature.


These chapters are simply fascinating, especially when Turner connects the dots between their early-year discoveries with the songs that ended up on “Revolver”. It also is the driving force behind their decision to cease live performances. Would they have put their foot down the previous year? Doubtful.


The book ends with the band returning to the studio to begin tracking on what eventually would become “Sgt. Pepper’s Lonely Hearts Club Band”. With a giant box set recently announced commemorating that album’s 50th anniversary, look for some thoughts on that in late May.
Email Post
Labels: Beatles R&R Literature scott hudson