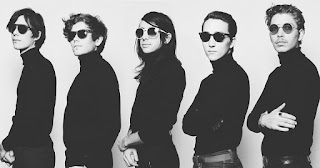 As I've stated numerous times this year, 2017 is shaping up to be a wonderful year in music. This has obviously made the traditional Live Ledge new release show so easy to put together. There's actually records that don't make the cut!!!

Tonight's show is no different. It's a wide mix of styles that range from the garage noise of The Masonics and CFM to the psych-rock of Froth. The Flamin' Groovies prove that they're still a fabulous band after almost 50 years, and there's outstanding new bands such as The Buttertones, and Bonny Doon.

There's also the return of some of my favorite acts such as The Jesus and Mary Chain, Guided By Voices, and Juliana Hatfield. Former Replacements drummer Chris Mars also has a new tune. One of my favorite songwriters, Matthew Ryan, also has a new album coming out soon, and he graciously allowed me to sample a couple of tracks.

As always, grab this episode from iTunes or Stitcher, or tell "Alexa" to play "The Ledge on Tunein". Or.

Thank you so much for all of your support over the years!
Email Post

Lucas Neville said…
No track listing? Shame - I find those useful after the show, so hopefully this is a one-off! Like the new site design by the way
7:41 AM

Sorry that there's no tracklisting this week. One of the artists involved requested that I refrain from listing their contributions. Don't worry. It will return next week!