Skip to main content
August 26, 2005
Jon Stewart Finally Says What I've Been Saying All Along 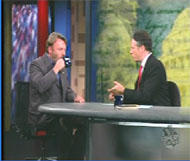 Last night, Stewart interviewed Christopher Hitchens, the Vanity Fair writer who has a new biography of Thomas Jefferson. A somewhat heated debate began over Bush and the Iraq war, culminating in this exchanage:

Stewart: The people who say we shouldn't fight in Iraq aren't saying it's our fault. . . That is the conflation that is the most disturbing. . .
Hitch: Don't you hear people saying. . .
Stewart: You hear people saying a lot of stupid [bleep]. . . But there are reasonable disagreements in this country about the way this war has been conducted, that has nothing to do with people believing we should cut and run from the terrorists, or we should show weakness in the face of terrorism, or that we believe that we have in some way brought this upon ourselves. . .
Hitch: [Sputter]
Stewart: They believe that this war is being conducted without transparency, without credibility, and without competence...
Hitch: I'm sorry, sunshine... I just watched you ridicule the president for saying he wouldn't give. . .
Stewart: No, you misunderstood why. . . . That's not why I ridiculed the president. He refuses to answer questions from adults as though we were adults and falls back upon platitudes and phrases and talking points that does a disservice to the goals that he himself shares with the very people needs to convince.

Hitch: You want me to believe you're really secretly on the side of the Bush administration. . .
Stewart: I secretly need to believe he's on my side. He's too important and powerful a man not to be.

The highlighted portion details my problem with everybody in this administration. I'm not a member of either political party. I've probably voted Republican as often as Democrat. There are aspects of each party that I support, along with plenty of aspects that I despise.
But I could never vote for the majority of people that call themselves Republicans these days. It's all talking points - one person says something on the first political show of the day and then it's repeated over and over for the next couple of days until it becomes a "fact". Any appearance by the President is micro-managed; last fall's stories about audience members being forced to sign loyalty pledges have been verified. His speeches are the same night after night, as Stewart showed earlier in the program.
Most importantly, nobody ever admits to any sort of mistake. If they say something incredibly stupid, they deny it until the cows come home - even if the footage of the original statement is readily available. Al Franken said it best the other day when talking about Rush Limbaugh. "It's like he takes this giant crap in public. Then when somebody discovers the crap, he tries to cover it up by kicking a bunch of dust around."
Wouldn't Rovegate be a dead story if Rove had just quietly resigned at the beginning of the controversy? Would we still be talking about Cindy Sheehan if Bush had just walked out and chatted with her on the first or second day she was there? I think both stories would have possibly disappeared, or at least became fringe stories.
Don't get me wrong - I have not become a Democrat. They have their own problems, primarily a lack of testicles. They're so worried about pissing off Middle America, and giving the Republicans ammunition for next year's set of "(insert name) hates America" ads - they shouldn't be. That's why I respect Paul Hackett - he was impressive last week on Bill Maher's HBO show. You got the impression that everything he said was truly his opinion, and not the result of polls and talking points.
Email Post

Anonymous said…
I kinda thought Paul H. came across as playing to the audience than giving an honest opinion.
4:40 PM