Skip to main content
August 30, 2005
Here’s a bit of a disclaimer before today’s diatribe. The words that you are about to read are by no means intended to disrespect those affected by the devastation created by Hurricane Katrina. What has happened is certainly heartbreaking, and I pray for those who have lost not only family and friends but their jobs, homes, cars, and other possessions.
My main beef, as is typical of any big story, is with the media. If you tuned into any of the news channels this past weekend, you were treated to story after story of an upcoming Armageddon, with water rising to the top of high-risers and the remains of hundreds of years of Louisiana citizens floating down the streets.
This hysteria was created simply because everybody used the same so-called expert, who utilized the Shawn Cable method of worst-case scenario in his predictions. In his view, this storm was going to make the Asian tsunami look like a picnic.
Granted, this person may be proven correct in some respects, as we are now starting to see the environmental aftermath of the storm. But this cable television mentality of constantly trying to scare us to death has got to stop.
This wasn’t the only example of the news channels attempting to frighten their viewers. As the storm finally hit Monday, every new development was exaggerated. For example, when the Superdome experienced some damage, CNN and Fox almost wet themselves – the building was set to collapse. Only MSNBC gave us the real story – there was some damage to the roof but the building itself (and the people inside) were safe. 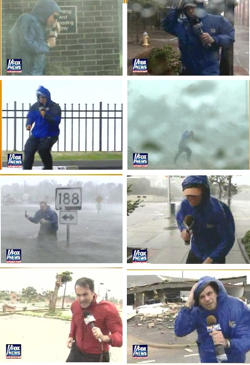 But what really drives me crazy about any storm, from tornados in this part of the country to snow storms in Colorado to the hurricanes in the southeast, is this insane policy of inserting reporters and anchors into the story.
There is nothing sillier than seeing these personality-lacking teleprompter readers standing in the middle of a storm describing what’s going on. There’s just no need for it. They can do that job from their anchor chair – the shots from stationary cameras sufficiently tell us what’s going on.
Just once I would like to see the wind take one of these ass clowns and deposit them twenty or thirty feet away. I don’t want them to get hurt…much. You know, it would be terrible to see them impaled on a tree. I guess I’d be happy just to see them scared by the sight of a cow or horse flying by. Let’s just have some sort of minor incident that causes the networks to rethink this policy.
I’d like to end today’s rant on a positive note, so I do have a hero of the hurricane. Sunday afternoon, Fox’s awful Shepard Smith was wandering around New Orleans interviewing residents on live TV. He approached one gentleman and asked him why he hadn’t left town. His answer – “none of your fucking business.” Now that’s a Hallmark moment.
Email Post