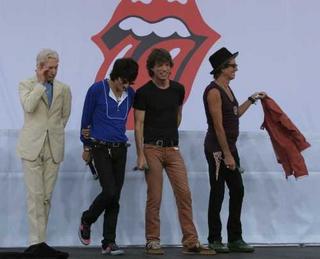 No, I'm Not Seeing the Stones This Year

This past summer, whenever I have run into old acquaintences one question has inevitably popped out of their mouth. “Are you going to the Stones?”
No, I’m not…and I don’t feel bad about it. I’ll admit that when tickets went on sale for their Minneapolis show a few months ago I did make a few inquiries into ticketmaster.com. But it just didn’t seem worth the hassle. The only way to attempt to buy a good seat was to pay fifty bucks to the Rolling Stones fanclub, and there was still no guarantee that I’d end up with “good” seats. I’m all in favor of giving true fans special access to the best seats, but I’ll be damned if I’m going to pay for that privilege. I think I’ve paid enough over the years – from vinyl and CD copies of every single album to t-shirts, books, posters, stickers, and other stuff. Hell, I even once owned a Rolling Stones eraser. Paying for the “opportunity” to purchase a ticket seems ridiculous.
Sure, I could have just skipped the presale and purchased a ticket like normal people do. Again, I did look into this. For “only” $150 I could sit in the upper balcony about 2/3 of the way back. With a high-power pair of binoculars I may have been able to see the band. No thanks.
I’ve never been a fan of arena-sized events. Give me a club the size of First Avenue, or a theater the size of the Washington Pavillion or the Orpehum in Minneapolis. I want to be able to see the face of the artist. I want the opportunity to eavesdrop on the little huddles between songs.
More importantly, I don’t want to see a show that’s completely scripted. That’s what you get in an arena show - a performance that’s the same from night to night, from the opening track to the lead guitarist’s extended solo segment to the two-song encore of their biggest hits. The light and sound crews know when everything’s going to happen, and there’s few, if any, sidesteps.
Obviously, however, I have made a few occasional pilgrimages to bigger venues. Springsteen, Dylan, R.E.M., and Green Day are a few of these exceptions. Note these are artists who continue to mix up their shows from night to night. Part of the fun of a Dylan show is guessing not only what song is next, but sometimes trying to figure it out during the actual performance of the tune.
The act that I’ve seen most often in bigger venues is the Stones. Starting with 1981’s performance at the University of Northern Iowa, I have traveled the entire Midwest to see the band on thirteen different occasions. I was in the second and third row for their 1989 Steel Wheels shows in Minneapolis. I was two rows ahead of Tom Arnold for a show in Ames, Iowa. I was in the front row in Colombia, MO, and close enough to the second stage for a fleeting appearance in a pay-per-view telecast in St. Louis. I even traveled to Chicago to see a Keith Richards solo tour.
Every one of these performances were fantastic. I have no complaints. Sure, I became sick of “Jumping Jack Flash” and other warhorses that are present to appeal to those who have never seen the band perform. But the Stones are smart enough to throw in a few oddball selections for people like myself – album cuts from Beggars Banquet and Exile on Main Street, covers of old r&b standards and Dylan’s “Like a Rolling Stone”, other 60’s hits that haven’t been played in decades, etc. The presence of those tunes made each of those shows memorable.
I’m sure this facet of the group will be retained on this tour. Rumor has it that the band is working up versions of close to 75 songs, along with a handful of tracks from their upcoming A Bigger Bang album. I’m sure the show will start off with a couple of classics, followed by a new song or two, a couple of rarities, and a short segment with Richards, before a big bang finish of four or five of their biggest hits. (The big rumor amongs the Stones fansites is that they're also working up Dylan's "Rainy Day Women #12 & 35".)
I’m sure it will be a great show, but I just don’t feel that I’ll be missing anything. I just can't get excited about sitting in a big stadium watching these old giants going through the motions for a big paycheck. I’ll buy the album when it comes out, but I don’t have high hopes that it will be as good as anything in their back catalog. How could it be? They haven’t had a strong album since 1981’s Tattoo You, which most people don’t realize was actually a collection of songs left off Some Girls and other 70’s albums.
What could they possibly say that hasn’t been said before? Actually, I think Keith could still pull off a strong album, as he cares more about the music than any focus group research. Mick, on the other hand, has had a tendency in recent years to try to latch onto any current trend in music style and production technique. The last time this technique worked was “Miss You”.
Email Post