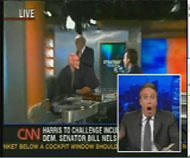 It's really sad that the best news show on television is a comedy show, but that is the current state of the biz. I figured that the quality of the Daily Show would subside after last year's elections, but the sarcasm has actually become more biting than ever before.

Stewart has always been a foe of pundit shows; he describes the name-calling as "zero outcome". Last year he went after Hardball's Tucker Carlson and Paul Begala on their show (finally).

Last night, he was like a kid in a candy store. (From Crooksandliars.com, "...even when it's not my birthday...today I received a gift, a beautiful gift, I wept with joy over receiving it..."

Jon then does a skit on his reaction to watching Novak lose it. Was Stewart savoring this moment on TV? Oh yeah. I was also close to tears in laughter. From there it was on to O'Reilly attempting to lecture John McCain on torture, and a hilarious story on the various people boycotting the awful Dukes of Hazard movie.
Email Post