The Explosion (Not) Heard Around Town 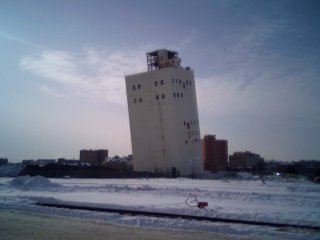 At first, I thought it was an earthquake.
This past Saturday, I was checking out some internet porn when suddenly the earth started shaking. Quickly realizing that it wasn’t my naughty bits causing the computer to squirm, I noted that it was exactly 12:55 p.m. Oh yeah, the demolition of the Zip Feed Mill was set for that time. Surely the exploding dynamite must be causing the disturbance.
Well, it wasn’t the dynamite…and that’s the problem. As everybody across the country (and beyond) has heard, the so-called biggest building in South Dakota buckled…and fell thirty feet straight down.
What exactly caused the disturbance felt all the way across town? Laughter. Besides the few thousand people scattered across the central part of the city, there were at least a few hundred people watching KELO’s twelve-camera shoot on their UPN affiliate. Within minutes, almost every blog in the area was filled with pictures of the leaning building and really awful one-liners such as “The Leaning Tower of Zip”. Others used the old-fashioned method of cell phones and coffee shop visits to spread the hilarious tale. Trust me, by 1:30 everybody was laughing harder than the combined hilarity of Dave Chappelle, Dane Cook, and all of the other major comedians could produce on their best night. 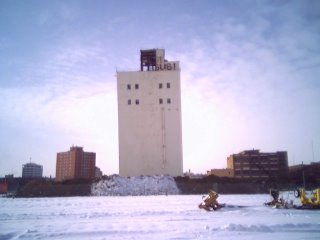 The only people not laughing were those with financial or political ties, including but not limited to the demolition crew, the property owners, and the city officials expecting a wonderful photo op. From what I’ve been told by observers, most fled as quickly as possible, leaving our silly Mayor and a rep of the demolition crew to offer sheepish explanations to reporters and television crews. Oh yeah, and I’m sure the demolition crew chief, Jim Wutzke, was mighty embarrassed once again the next day when the Argus reprinted this quote, “This one here is a slam dunk. This is about as easy as they come.”
It serves them right. What should have been a minor event worthy of only a special interest story at the end of a news broadcast was turned into an over-hyped piece of propaganda for the land owners and Mayor Munson. His dreams of a legacy that he undoubtedly visions would be called the Dave Munson/Wells Fargo/Sioux Valley Hospital Event Center probably evaporated the second the building settled into the basement.
I’ll admit that it was great that somebody figured out how to turn the act of tearing down a building into a charity event, but maybe some time should have been spent explaining the causes and effects of MS, and the potential benefits with the raised money. Instead, last week it was the only story outside of “Blizzard 2005”to make the front page of the newspaper and the TV news broadcasts. Just how many times did we need to see “Colonel” Jorgenson don a hardhat to point out where the explosives were to be placed? Was the winning draw by Dollar Loan Center really worthy of a live feed? How many photos of the building did the newspaper need to publish? 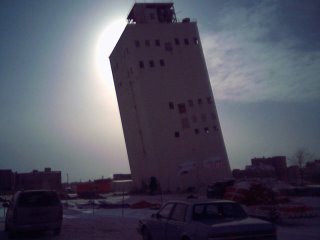 Of course, after a couple of days everybody had their game faces back on. Dumbass Munson returned to his “aw shucks” stuck-in-the-headlight grin. Rick Knobe, with some help from other city leaders, attempted to explain to his audience on KSOO that those involved had no reason to be embarssed. The blasting company tried to say that it wasn’t their fault (although one of the construction guys told me two days BEFORE the event that he didn’t think they had enough explosives). And the awful puns kept on coming in the media – the Argus even featured a whole page of reader suggestions.
I guess if one has to find something positive in this story (besides my glee in seeing the embarrassment of our city leaders) it would have to be the fact that Sioux Falls finally replaced Mitchell as the host of the state’s weakest tourist trap. Who needs the silly Corn Palace when we have a crooked building?
Before I conclude this rant, however, I must put aside my cynicism for just a second. As I was putting the finishing touches on this piece last night, I received a phone call from a young woman pleading with me to play nice on this topic. Having recently moved from California, she pointed out that instead of the murders, rapes, and other major crimes that fill their newscasts, our entire town (let’s not pretend that we’re a city) still gets excited by minor events such as this one. Hell, I even drove down there a couple of days ago and took a few photos. We’ve all been laughing for the last four days; shouldn’t that be considered a good thing? 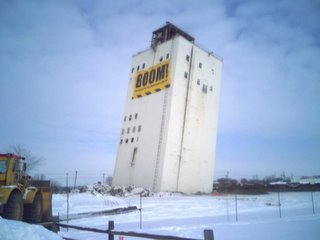 Anonymous said…
It's true. We're all full of bitterness and cynicism here in the blogosphere and in the alternative-media, but I'm glad I live somewhere that considers a tower's destruction the highlight of the news.

Still, regardless of the banality and safety of it...

Anonymous said…
Did anyone else notice the interview with Munson before the mishap? Jodi Schwann was literally thrusting her pelvis towards him and was unable to stand still during his babbling.

When I saw her at the polls last night I really wanted to punch her in the head.
5:35 PM