It Was 25 Years Ago Today 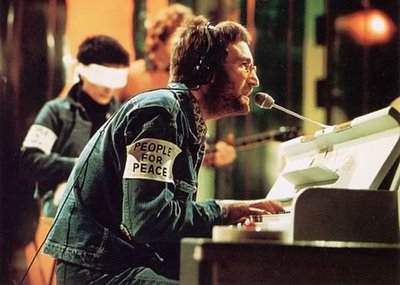 Until I turned on the radio this morning, I had completely forgotten that today marks the 25th anniversary of the murder of John Lennon.
I know that I’ve stated this many times before, but I was born the day that the Beatles entered the EMI studios to record their debut single, “Love Me Do”. Perhaps because of this silly coincidence (and let’s face it, that’s all it is), the Beatles have always been near and dear my heart.
Sure, if I’m going to be completely honest the Replacements are my favorite band. Paul Westerberg’s lyrics have always hit me in a way that no other writer can manage. But that doesn’t dismiss the impact of the Fab Four. The first album I hijacked from my parents was “Hard Day’s Night”. The first album I ever bought with my own money was “Sgt. Pepper”. When I began seriously purchasing music the first artist whose entire catalog was purchased was the Beatles…and until the late 80’s I collected anything and everything associated with any of the four members (obviously, I have a lot of really bad Ringo and McCartney albums collecting dust).
John Lennon was my favorite Beatle…well, most of the time. I went through phases with each of them…even Ringo. But I always went back to Lennon. How could I not? His love of primal rock ‘n’ roll, his experimental edge, and, most importantly, his sarcasm, fit my personality the best. Paul was too nice; George’s mysticism was admirable but frankly a bit boring. As I said before, Ringo was just Ringo (although in hindsight he was a much better drummer than he’s generally credited).
Like most people, I found out about Lennon’s death from Howard Cosell. I don’t remember watching the Monday Night Football game, but I know I was in the room when the announcement was made. I immediately took control of the television, and threw in a video tape. For the next three days (and a little beyond) I taped everything Lennon-related. We had just had cable installed, although cable television back then was just a few channels beyond the local network affiliates.
Seriously, I taped everything…even the channel that was nothing more than an AP wire scroll. I taped the local and national news. I lucked into the rerun of Tom Snyder’s infamous Lennon interview. This was all before VH1, MTV, and cable news (except for CNN). I wish I knew where those tapes are tonight, but multiple moves and format changes have made those types of artifacts impossible to locate.
I cried more in that week than I probably had in my entire life. I shut myself in my room multiple times and just sobbed. To this day, I get tears in my eyes when I hear “In My Life” or the “I don’t believe in Beatles” line from “God”.
I must admit that I’m a bit shocked that this anniversary has received only moderate notices today. Sure, the newspapers have run short stories, and the news channels have mentioned it. PTI spent ninety seconds on it. Yet none of the networks are running Lennon or Beatles specials. None of the music channels are giving up any time – VH1 is running a marathon of America’s Next Top Model, VH1 Classic is doing the same with that silly INXS reality show, and MTV is wasting the evening with multiple airings of Diddy’s Making the Band. That’s inexcusable.
As I stated earlier, I had also forgotten about the anniversary. But that’s not to say I had forgotten about the man. Just yesterday I purchased reissues of Sometime In New York City and Walls and Bridges; not among his better solo albums but even his worst albums had their merits. Each of those discs now features bonus tracks, and while driving through town my second favorite Christmas song of all time came up (The Pogues “Fairytale of New York City” will always be my favorite). “Happy Xmas” sounds as fresh today as it did when it was released 33 years ago, especially with the amazing remastering job Apple performed on the track.

A very merry xmas
And a happy new year
Let’s hope it’s a good one
Without any fear
War is over, if you want it
War is over now

I think I’ll pop in one of the Anthology discs. Happy Xmas, John.
Email Post