My Letter to Santa 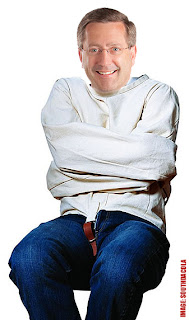 Dear Santa,
It’s hard to believe that it’s been a full 12 months since my last letter. What a year it’s been! We’ve seen a lot of changes in our community, or at least that’s what we’re led to believe by following our local media. My life, however, has seen absolutely no change, so once again I’m asking you to provide for others:
1.  Our new Mayor, Mike Huether, has a giant wish list. More than once, he has stated that he wishes he could be cloned because there’s so much he wants to do. Yeah, I know. He also wants a giant, destined-to-be-underutilized monstrosity of an events center, and smaller buildings for every single special interest group. Santa, what Huether really needs will cost at least $150 million less than what he’s been asking from you. You see, he really has a problem keeping his arms under control when he speaks, and a quick search on google shows that for less than $50 you can provide him with a straitjacket. Please purchase this for him, as his arms are a safety issue for not only himself but anybody within five feet of him.
2. While you’re shopping for our Mayor, there’s a simple gift that you can pick up for his best pal Darrin Smith. To ensure that he’s always within arm’s reach of his boss and can cater to his every whim (especially now that it will be safe to be so close to Huether), grab a cheap dog leash. I’d ask to include a shock collar, but it’s clear that Darrin will NEVER say anything without running it by his BFF.
3. Let’s move on to our new Governor, Dennis Daugaard. He’s clearly a HUGE fan of recycling, as his only move since being elected has been to shift his old pals from department to department. It’s obvious that the perfect gift for our state’s new leader would be a gigantic recycling bin.
4. Now Santa, there is one wonderful local man who for years has had big dreams of running our fine city. Unfortunately, he never gained more than a couple hundred votes in either of the Mayoral elections where he participated. I have two ideas for Janoct Adja. One is a practical idea – make him a city employee of some sort. His skills would be perfect for the Parks Department, or even the Streets Department. What I really want to see Janoct receive, though, is a trademark on the phrase “Stuck On Stupid”. I wouldn’t mind paying him a royalty for using it, and I can guarantee that this phrase will be well-utilized over the next few years.
5. Speaking of “Stuck On Stupid”, are you aware of the morons who get riled up whenever this holiday season isn’t phrased the way you desire? It’s beyond asinine, so I’d like for you to help educate these cretins. Please pass out thesauruses to anybody who believes there’s a “War on Christmas” so they can better understand that different words and phrases can have the same meaning.
6. Let’s move on to those that can’t handle navigating the mean streets of Sioux Falls. Anybody who changes lanes without looking or using their turn signals, or forces entire lanes to sit through a green while you meander through an illegal left turn, should just be given a copy of Grand Theft Auto and told to stay home.
7. Oh Santa, I almost forgot to include our new Representative, Kristi Noem. This is a tough one for me to talk about, Santa, as I don’t want to come off as appearing superficial. Just hear me out, please. I fully believe there’s a beautiful woman hidden behind poor fashion choices. Let’s get rid of her awful Avon makeup and Great Clips hairdo, and replace it all (along with her clothes) with the products that enhance her new power as a Washington, DC MILF. One word of advice, though – don’t let her anywhere near John Boehner’s tanning booth.
8. I’d like to conclude this list with something for the Build It Downtown crowd, but I’m pretty sure they’ve already sent you their lists. I have a word of warning for you, though, Santa. They don’t believe in compromise. You better give them whatever they want, or they’ll run right to the media and demand that you fulfill their demands.
That should be enough for this year, Santa, besides my usual plea for everybody to have not only a wonderful holiday season, but for 2011 to be the best year of their lives. Please have a safe journey as you travel around the world bringing smiles to children of all ages.
Email Post
Labels: Daugaard Huether Noem

Anonymous said…
Huether wants to build parking on the north side of Russell Ave. And then a high-rise walk way that people won't even use. People will be running across the street dodging cars to get to the new EC. Accidents and lawsuits if he follows through on his plans. There's no way 3000 to 5000 parking spots can be created west and south of the proposed area.
Kurt
7:38 PM

Anonymous said…
Looks like the "interest group" that wants the new EC built downtown are proposing that it be built close to Minnesota Ave., where Studio One is located, and the Pomp use to be. The theory is that when the switch yard tracks are relocated in 2014, the emptied space would then be used for event center parking. The downtown interest group is now mobilizing to vote no on the upcoming event center special election, forcing Huether to reconsider the downtown location if he wants the 'downtown voter' support.
Kurt
5:56 PM