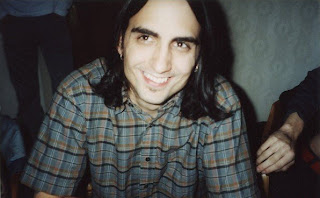 If there was ever a MVP of the Sioux Falls music scene, it would have to be Terry Taylor. As a record store clerk/buyer, his seal of approval was all most punk, hardcore, or metal fans needed. He also spent time in a number of bands that actually broke out of the local scene, playing all over the country.

Most importantly, though, is Terry's work as a concert promoter. Terry's events evolved from a few dozen attendees at garage and basement shows to thousands at rented halls. His successes eventually convinced the Pomp Room to initiate all-ages shows, and other more respectable buildings finally welcomed his talents. Over the years, he was responsible for bringing in Green Day, Offspring, Fugazi, Henry Rollins, Less Than Jake, Babes in Toyland...oh hell, almost any punk, indie, or hardcore show of the 90's was a Terry Taylor production.

Taylor is still booking shows in Sioux Falls these days, along with a few other states, as the co-owner of Hunt Industries in Lawrence, KS. In this episode, Taylor reminisces about his life as a fan, promoter, and musician. You can download this episode directly onto your Apple or Android product via The Ledge app, or directly download it here.


1. Leonard Cohen, Dance Me Till the End of Love (Live)

3. Volbeat, Back to Prom

4. Against Me, Thrash Unreal

13. Teenage Bottlerocket, In the Basement

14. Teddybears, Yours to Keep