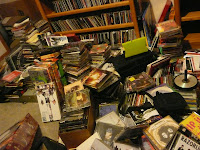 Although I have kept the publicity of the show to twitter and Facebook, for the last three months I've been doing a live show every Friday night at 5pm on RealPunkRadio. There's a stream and chat box on the left hand side of this page, so anybody can participate in the (usually drunken) proceedings.

The most excellent Mojo Workout follows me, and with greats such as Russell Quan (The Mummies), Mike Lucas (Phantom Surfers), and Yoshiko of the 5,6,7,8's appearing alongside the rest of the Mojo crew this week, I knew I had to bring on at least a B+ game.

After a couple of extremely potent Whiskey/Throwback Mountain Dews, the decision was made to turn this episode of Live Ledge into a contest. The format was simple - I played two versions of one song and allowed the chat to decide which was the stronger version. At times, the results were as expected, but quite often I was more than shocked at the victors.

The contest is not over yet. Download the show here, and in the comments section choose your victors. Interesting answers may be a part of next week's insanity!

1. "Love Is All Around" between Joan Jett and Husker Du.

2. "Helter Skelter" between Husker Du and Siouxie & the Banshees

3. "Here She Comes Now" between Galaxie 500 and Nirvana

5. "Children of the Revolution" between Lloyd Cole and Violent Femmes

6. "Head On" between the Pixies and Jesus & the Mary Chain

8. "Bastards of Young" between Against Me and Two Car Garage

9. "Whole Wide World" between the Pristeens and Paul Westerberg

10. "Anyway, Anyhow, Anywhere" between the Flaming Lips and David Bowie

12. "Brand New Cadillac" between the Clash and Vince Taylor

14. "Louie Louie" between Black Flag and The Wailers

15. "Hey Joe" between The Creation and The Dukes of Hamburg
Email Post
Labels: The Ledge

Grant Wentzel said…
Great show! Never heard some of those tracks before, including the original Brand New Cadillac.

Guess I'm the only one who liked both versions of "Bastards Of Young." But then again, I'm a fan of both Against Me and Two Cow Garage, so objectivity is all out the window.
1:41 PM

Scott said…
Thanks, Grant. I always enjoy hearing that people have never heard some of the stuff I play. One interesting thing of note - one of the listeners sent to me another version of Brand New Cadillac by an obscure 60's band. i'll play that sometime soon.

Truthfully, I also enjoyed both versions of Bastards...but for some reason the others in the room didn't agree.
1:47 PM