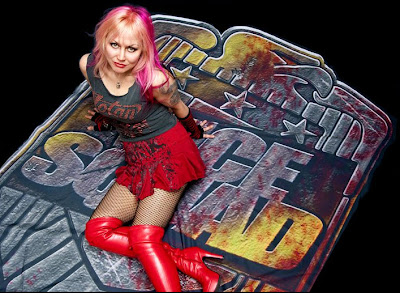 A few weeks ago, our fearless leader at Real Punk Radio, Jason Snyderman, asked me if I'd be interested in interviewing Vice Squad's Beki Bondage. My answer should be obvious to everybody. A few emails later, Beki was connected to the Ledge studio setup via Skype, along with bandmates Paul Rooney and Wayne Firefly.

If you're not acquainted with the explosive sounds of Vice Squad, you need to check out the show. The band was formed in the UK city of Bristol during the first wave of British punk. After a few D.I.Y. releases, they signed to EMI and in 1981 hit the UK Top 40 with their debut album, No Cause For Concern. A tour of America followed the release of their second album, Stand Strong, but the initial lineup fell apart shortly after their return to Britain.

Bondage reformed the band in 1997, and they've put out a steady stream of material ever since. Four tracks from recent Vice Squad albums highlight this episode, and the conversation includes every aspect of her career. You can hear this episode via the usual methods, including The Ledge iPhone/Android app or a direct download here.

Besides the conversation, Beki also chose the tunes for this episode: