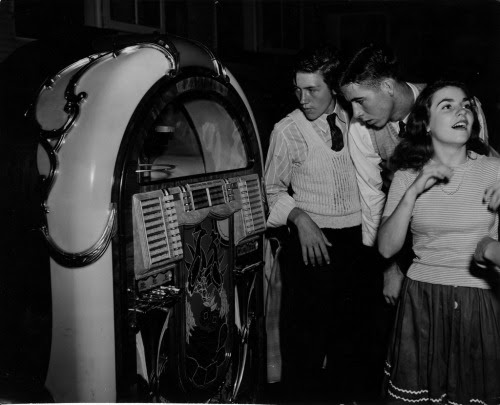 It's one of the most beautiful combination of noises a music fan can experience. Standing in front of the ageing monstrosity of a machine, the quarters are dropped. Cling! Cling! Cling!
The credits roll up as you take a look at the seemingly endless possibilities. Wait, THAT song is available? No fucking way! You quickly are down to one last choice, but you're torn three or four different ways. You haven't heard this one in forever, yet this other one is your favorite song in the world. Or...if you pick this one certain track that you would never otherwise even consider, maybe just maybe a certain person will reward you with a kiss. Or more.
Of course, that's the song you go with, and the noisy mechanism under the glass starts sliding over to your selection. The way it makes the entire machine shake indicates that this machine means business. It suddenly stops, causing one last massive wobble, and you hear the squeak as the arm pulls the record out of the library.
A low hum is the next sound you hear as the motor that powers the turntable comes on. The record is already spinning as you hear the thud of the needle touching the record. A crackle or two is also present as the needle searches for the groove.
Then it begins. Those with superior ears may wince as they hear the flaws in the vinyl, the lack of stereo separation, or the missing sound frequencies, but it sounds like heaven to you. All of those instruments and voices that can be individually heard on a modern surround sound system merge together into one giant Phil Spector-ish cacophony of noise.
Yet the song has never sounded better to you. It moves you in a way that you feel not only in your ears but your gut and heart. Even the most romantic ballad has balls, and the greatest rock 'n' roll band in the world could recreate the power of the more upbeat tunes. (Yes, even the Stones at their 1973 finest.) You want the moment to last forever, and for a few seconds you even forget that girl that inspired you to pick this track. Yet you are now ready for her. More ready than you ever have been before.
Tonight's show is all about those sounds, feelings, and even that smell. Trust me, there are only a couple of fragrances greater than a jukebox whose inner electronics has been smoldering for the last two hours. Instead of an iTunes playlist or another sort of computerized broadcaster, my Seeburg jukebox provides tonight's soundtrack.
It could have easily been a technological disaster, as I had to navigate multiple mics that I prayed were set and pointed at the correct spots. Yes, some records sound better than others, especially given the fact that many of tonight's selections originated at garage sales and Goodwill. Others came from buddies by the names of Craig, Jim, Jon, Drazzle, and Mikeyboy. Some have never been played, while overplay has created flaws in others.
Honestly, though, tonight's show sounds better than it has any right to sound. I was pleasantly surprised as I did a touch of editing. Grab it now and I almost guarantee that you'll now understand why this fifty year-old machine was my best purchase in years.