A few days after last Thanksgiving, my good buddy Craig called me. “Hey, Graham Parker and the Rumour are playing in the Cities. Are you in?” 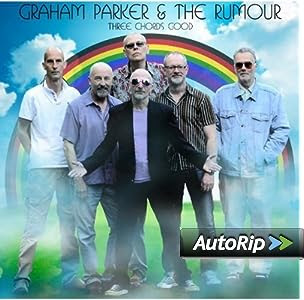 It took me about five seconds to contemplate this question before I answered in the affirmative. Mid-December we headed up to see the man perform at the Fitzgerald Theater in St. Paul.
This wasn’t an ordinary out of town venture for either of us. Graham Parker was one of our idols from his legendary albums of the late 70’s. He perfected the angry songwriter persona that Elvis Costello copied for bigger fame and fortune.
He was also the interview that I’m most proud of conducting. Certainly, I interviewed bigger stars in my Tempest days. Motley Crue’s Tommy Lee gave me all the juicy info of his sex tape just days after the footage hit the internet. Two members of Cheap Trick dealt with my fanboy questions during that time period. Frank Black, Bob Mould, Tommy Stinson, Todd Snider...the list goes on.
Graham Parker topped them all, and it was a great conversation as we chatted about his entire career. I’m sure it helped that my first comment to him was that VH1 should have hired him to host their new series, Songwriters. “You should write (producer) Bill Flanagan and tell him that”, was the response. Parker liked the resulting article enough that it had a place on his website for at least a full decade.
So here we are almost twenty years later making that long drive to see Parker. This show was the tour’s last stop with the just-reunited Rumour. That band had broke up way back in the early 80’s, and various articles pointed out that none of the band’s children (and most of their wives) had never seen them play with their most famous bandmates.
The show was as great as expected, with Parker mixing in tracks from all of their albums together, including the just-released reunion record, Three Chords Good. Even better was what happened about two hours after the show concluded.
We had wandered around downtown St. Paul after the concert, unsuccessfully looking for a suitable place to have a few drinks. Finally deciding to just hit the hotel bar, I was the first to notice what a table full of middle-aged men who were clearly not bankers or lawyers.
Yes, we had stumbled upon the post-tour party of Graham and his band! We slyly chose a table far enough away to not be a fanboy pest, but close enough that we could view the festivities. Noticing that they were drinking champagne, we had a bottle sent over. And then another.
The plan worked. Graham wondered who purchased the bubbly, and he ended up spending a half hour or so with us. We talked about my old interview, his Sioux Falls performance, the band’s reunion, and their appearance in the movie “This Is 40”. Later, we met various other members of the band, including keyboardist Bob Andrews, whose post-Rumour career included producing acclaimed released by Ten Pole Tudor, The Bluebells, and The La’s.
All of these memories came back to me this afternoon, as my walking soundtrack for the day was the record that was the reason for that tour. Three Chords Good was released a couple of months before that show, but I must be honest. While Parker’s new songs rank among his best in years, and are every bit as biting, the album needs a couple of blistering rockers. Live, these songs stood up well with the 70’s classics, but the production on the album is a bit languid. It’s a good album that easily could have been great.
Oh well, it’s still great to have them back, even if it is a one-off project. On a day where the overheated temps of yesterday were replaced by sweat-inducing humidity, it was a perfect companion. Isn’t that what matters for this lazy man’s exercise project?
Email Post
Labels: graham parker scott hudson walking rock alphabet