Another “no excuse” day for this little project. The temp was over 80. Laying on the couch was not an option. I even opted for shorts, which means that a number of people were blinded by something other than the hot sun. 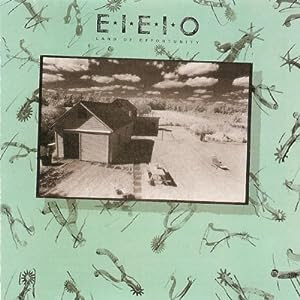 For today’s selection, one must jump back to the mid-80’s. Although their sales didn’t skyrocket for another five years or so, this was the era where the influence of R.E.M. was at its peak. Every label, major AND indie, was looking for their own jangle-pop kings, and this influence was most felt on our local college station, KAUR. In fact, we used to joke that the with the playlist dominated by bands such as Guadalcanal Diary, Wire Train, and so many others, the station should be called K-REM.
One of the more obscure of these types of bands was E-I-E-I-O, and their big “hit” was “This Time”. Forget about R.E.M., if you want the quintessential jangle-pop track this is the song to go to. If one didn’t know better, it wouldn’t be out of the question to believe it was a long-lost Byrds single slightly speeded up.
Yet little was ever known about this band, which was typical for the era. If you weren’t on a major label, or considered a “major” indie band, band info was hard to come by. In this case, the album that featured “This Time”, suddenly found itself in the new release bin at KAUR, and if you were lucky you could special order it at Ernie’s.
In fact, it wasn’t until earlier this year that I found out more about this band. Somewhere I recall hearing they were from Wisconsin, but this wasn’t confirmed until I interview the BoDeans earlier this year. E-I-E-I-O were contemporaries of tthe BoDeans during an era where live music was thriving, partly thanks to the time’s lower drinking age. After this chat, I knew at some point this album would be a part of my spring walk.
What’s most surprising about the full album is how “This Time” isn’t a true representation of the band. The rest of the record is primarily mid-tempo bar band rock that’s not unlike the early BoDeans material, combined with a bit of Rank and FIle’s twang. It’s probably no surprise that the album was produced by Steve Berlin of the Blasters and Los Lobos.
Truthfully, while there are few true clunkers on the disc, “This Time” is by far the highlight, and will always be the track that ends up on “lost singles” playlists.
Now that I’m all sweaty, it’s time for some refreshments.
Email Post
Labels: EIEIO scott hudson walking rock alphabet