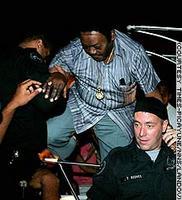 One of rock 'n' roll's chief architects has been rescued from the rubble of New Orleans.

Fats Domino, who had been unaccounted for in the wake of Hurricane Katrina, was plucked from the flooded city by a helicopter late Thursday. He was reported to be in good condition.

An APB went out for the musician and his family earlier in the day.

The musician's niece, Checquoline Davis, posted a plea on Craigslist.com for information on her missing relatives, writing that Domino and his wife, Rosemary, and their children and grandchildren "didn't get out" of their New Orleans home. Her plea was one of thousands seeking information on missing friends and family on the site.

The R&B legend had last been heard from on Sunday night, a day before the storm struck. During a phone call with longtime agent Al Embry, the 77-year-old performer insisted he would ride out the hurricane in his three-story home.

It is not immediately known if Domino's family made it to safety.

Domino's house was located in the city's 9th Ward, an area that is heavily flooded and littered with dead bodies.

The singer and boogie-woogie pianist, born Antoine Domino, has sold over 110 million records in his nearly five-decade career highlighted by the jukebox staples "Blueberry Hill" and "Ain't That a Shame." The New Orleans music fixture's 1949 recording of "The Fat Man" is considered by some to be the first rock 'n' roll record, and Domino was among the inaugural group of inductees into the Rock and Roll Hall of Fame in 1986.

Another Hall of Famer, singer-songwriter Allen Toussaint, was listed among the missing, although Fox News reported that Toussaint may be among the 20,000-plus refugees seeking shelter in the Super Dome.

With New Orleans a hub of jazz, blues and even rap, several musicians were impacted by the storm. Rapper Juvenile's home was destroyed and he says he has lost several friends. Soul Asylum frontman Dave Pirner, who was waiting out the storm in his native Minneapolis, told the Associated Press he still hadn't heard anything about the condition of his home and recording studio in the Crescent City. Pirner moved there seven years ago.

Meanwhile, several high-powered denizens are rallying support. Master P, whose home was swamped and who hasn't been able to track down his uncle, father-in-law or sister-in-law, has announced the formation of a charity, Team Rescue, and is organizing a "Save Our Hood" concert and benefit album. Wynton Marsalis will play both NBC and BET's telethons in the coming days. Louisiana natives Tim McGraw and Harry Connick Jr. will also perform at the NBC event and have made public appeals for help.

"I haven't slept in days," Connick says in a statement. "Although I now finally know that my immediate family in New Orleans is safe, I have not heard from many, many friends and other family members.

"New Orleans is my essence, my soul, my muse, and I can only dream that one day she will recapture her glory. I will do everything within my power to make that happen and to help in any way I can to ease the suffering of my city, my people!"
Email Post