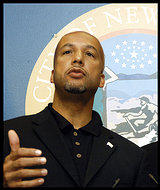 The following is a transcript of WWL correspondent Garland Robinette's
interview with Nagin on Thursday night. Robinette asked the mayor
about his conversation with President Bush:

NAGIN: I told him we had an incredible crisis here and that his flying
over in Air Force One does not do it justice. And that I have been all
around this city, and I am very frustrated because we are not able to
marshal resources and we're outmanned in just about every respect.

You know the reason why the looters got out of control? Because we had
most of our resources saving people, thousands of people that were
stuck in attics, man, old ladies. ... You pull off the doggone
ventilator vent and you look down there and they're standing in there
in water up to their freaking necks.

And they don't have a clue what's going on down here. They flew down
here one time two days after the doggone event was over with TV
cameras, AP reporters, all kind of goddamn -- excuse my French
everybody in America, but I am pissed.

WWL: Did you say to the president of the United States, "I need the
military in here"?

NAGIN: I said, "I need everything."

Now, I will tell you this -- and I give the president some credit on
this -- he sent one John Wayne dude down here that can get some stuff
done, and his name is [Lt.] Gen. [Russel] Honore.

And he came off the doggone chopper, and he started cussing and people
started moving. And he's getting some stuff done.

They ought to give that guy -- if they don't want to give it to me,
give him full authority to get the job done, and we can save some
people.

WWL: What do you need right now to get control of this situation?

NAGIN: I need reinforcements, I need troops, man. I need 500 buses,
man. We ain't talking about -- you know, one of the briefings we had,
they were talking about getting public school bus drivers to come down
here and bus people out here.

I'm like, "You got to be kidding me. This is a national disaster. Get
every doggone Greyhound bus line in the country and get their asses
moving to New Orleans."

That's -- they're thinking small, man. And this is a major, major,
major deal. And I can't emphasize it enough, man. This is crazy.

I've got 15,000 to 20,000 people over at the convention center. It's
bursting at the seams. The poor people in Plaquemines Parish. ... We
don't have anything, and we're sharing with our brothers in
Plaquemines Parish.

It's awful down here, man.

WWL: Do you believe that the president is seeing this, holding a news
conference on it but can't do anything until [Louisiana Gov.] Kathleen
Blanco requested him to do it? And do you know whether or not she has
made that request?

NAGIN: I have no idea what they're doing. But I will tell you this:
You know, God is looking down on all this and if they are not doing
everything in their power to save people they are going to pay the
price. Because every day that we delay, people are dying and they're
dying by the hundreds, I'm willing to bet you.

We're getting reports and calls that are breaking my heart, from
people saying, "I've been in my attic. I can't take it anymore. The
water is up to my neck. I don't think I can hold out." And that's
happening as we speak.

You know what really upsets me, Garland? We told everybody the
importance of the 17th Street Canal issue. We said, "Please, please
take care of this. We don't care what you do. Figure it out."

WWL: Who'd you say that to?

NAGIN: Everybody: the governor, Homeland Security, FEMA. You name it,
we said it.

And they allowed that pumping station next to Pumping Station 6 to go
under water. Our sewage and water board people ... stayed there and
endangered their lives.

And what happened when that pumping station went down, the water
started flowing again in the city and it starting getting to levels
that probably killed more people.

In addition to that, we had water flowing through the pipes in the
city. That's a power station over there.

So there's no water flowing anywhere on the east bank of Orleans
Parish. So our critical water supply was destroyed because of lack of
action.

WWL: Why couldn't they drop the 3,000-pound sandbags or the containers
that they were talking about earlier? Was it an engineering feat that
just couldn't be done?

NAGIN: They said it was some pulleys that they had to manufacture.
But, you know, in a state of emergency, man, you are creative, you
figure out ways to get stuff done.

Then they told me that they went overnight and they built 17 concrete
structures and they had the pulleys on them and they were going to
drop them.

I flew over that thing yesterday, and it's in the same shape that it
was after the storm hit. There is nothing happening. And they're
feeding the public a line of bull and they're spinning, and people are
dying down here.

WWL: If some of the public called and they're right, that there's a
law that the president, that the federal government can't do anything
without local or state requests, would you request martial law?

NAGIN: I've already called for martial law in the city of New Orleans.
We did that a few days ago.

WWL: Did the governor do that, too?

But we called for martial law when we realized that the looting was
getting out of control. And we redirected all of our police officers
back to patrolling the streets. They were dead-tired from saving
people, but they worked all night because we thought this thing was
going to blow wide open last night. And so we redirected all of our
resources, and we hold it under check.

I'm not sure if we can do that another night with the current
resources.

And I am telling you right now: They're showing all these reports of
people looting and doing all that weird stuff, and they are doing
that, but people are desperate and they're trying to find food and
water, the majority of them.

Now you got some knuckleheads out there, and they are taking advantage
of this lawless -- this situation where, you know, we can't really
control it, and they're doing some awful, awful things. But that's a
small majority of the people. Most people are looking to try and
survive.

And one of the things people -- nobody's talked about this. Drugs
flowed in and out of New Orleans and the surrounding metropolitan area
so freely it was scary to me, and that's why we were having the
escalation in murders. People don't want to talk about this, but I'm
going to talk about it.

You have drug addicts that are now walking around this city looking
for a fix, and that's the reason why they were breaking in hospitals
and drugstores. They're looking for something to take the edge off of
their jones, if you will.

And right now, they don't have anything to take the edge off. And
they've probably found guns. So what you're seeing is drug-starving
crazy addicts, drug addicts, that are wrecking havoc. And we don't
have the manpower to adequately deal with it. We can only target
certain sections of the city and form a perimeter around them and hope
to God that we're not overrun.

WWL: Well, you and I must be in the minority. Because apparently
there's a section of our citizenry out there that thinks because of a
law that says the federal government can't come in unless requested by
the proper people, that everything that's going on to this point has
been done as good as it can possibly be.

WWL: I know you don't feel that way.

NAGIN: Well, did the tsunami victims request? Did it go through a
formal process to request?

You know, did the Iraqi people request that we go in there? Did they
ask us to go in there? What is more important?

WWL: You and I will be in the funny place together.

NAGIN: But we authorized $8 billion to go to Iraq lickety-quick. After
9/11, we gave the president unprecedented powers lickety-quick to take
care of New York and other places.

You know, I'm not one of those drug addicts. I am thinking very
clearly.

WWL: What can we do here?

NAGIN: Keep talking about it.

WWL: We'll do that. What else can we do?

NAGIN: Organize people to write letters and make calls to their
congressmen, to the president, to the governor. Flood their doggone
offices with requests to do something. This is ridiculous.

Don't tell me 40,000 people are coming here. They're not here. It's
too doggone late. Now get off your asses and do something, and let's
fix the biggest goddamn crisis in the history of this country.

WWL: I'll say it right now, you're the only politician that's called
and called for arms like this. And if -- whatever it takes, the
governor, president -- whatever law precedent it takes, whatever it
takes, I bet that the people listening to you are on your side.

NAGIN: Well, I hope so, Garland. I am just -- I'm at the point now
where it don't matter. People are dying. They don't have homes. They
don't have jobs. The city of New Orleans will never be the same in
this time.

Anonymous said…
Hey, I came by actually looking for a specific blog.... but got yours instead. However, after looking around a bit, I see that it is well worth bookmarking for more visits later. Cat Furniture
3:02 PM