White Trash Parents of the Year! 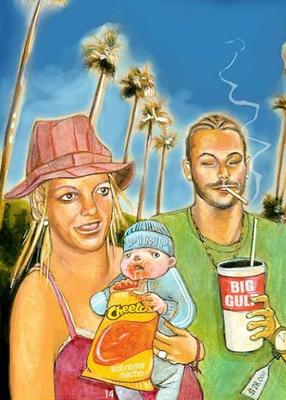 The great Radar Online says that "West Coast paparazzi have been on high alert since Britney Spears gave birth last week." In response, Spears has taken extraordinary steps ... so she can sell the baby pics herself.


Britney's hired several look-alikes to pose as her and she's reactivated her entire security team that she used back when she was on tour ... most of the precautions are to keep the paparazzi from getting any photos of the kid."

Radar says that this "doesn't mean (you wont see) the newborn in the checkout line soon." (Spears) has been approached by all the major tabloids bearing competing offers for a first look. Sources say that OK! magazine has promised her $2 million for an exclusive cover shoot. As for dear old dad? "Kevin gets 50 percent of all that money. Tabloid money is the only real money he ever makes," says the source. Of course, if the paparazzi get there first, any windfall the couple has in mind would decrease significantly. In other words, "Britney has to keep Preston under wraps if she wants the big bucks!"

Keep in mind, just last year her net worth was valued at 32 million, but since she pissed away a lot of that since then, her child is now a commodity to be exploited. With none of that money going to the baby of course. I haven't bought that much baby furniture, but I bet the low profile stuff with extra sharp corners is probably pretty cheap. Especially if you buy it used, since it will be covered in blood. But its not all pointy jabby traps in the room, oh no, there's also a 4 dollar Dora the Explorer blow up chair. That she bought. For a boy. Awesome. The kid was going to grow up to be a cop killer anyway, now he's going to be a cop killer in drag, so that'll at least be entertaining. For everyone but the cop.
Email Post