Scott McClellan is lying in his daily press conference. He lies again in claiming that everyone believed "New Orleans Dodged A Bullet." In fact, the only media outlet we could find with that headline was the far right religious website WorldNet Daily. Here's a link to the headlines Tuesday morning -- all of them say "Devastation!" and the like. Even Stars & Stripes -- the military paper -- spoke of the tremendous disaster. The levees broke Monday morning. It was announced Monday afternoon at 2 p.m. And as one reporter asked Scotty, "Does the President rely on news headlines?" 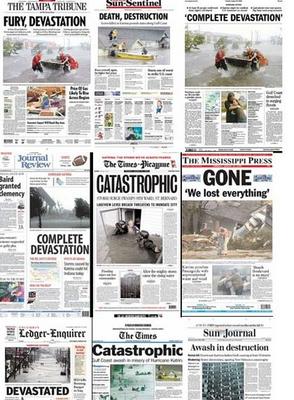