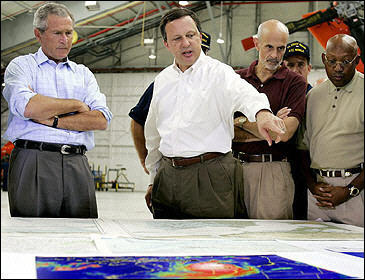 Another Timeline (From Tonypierce.com)
"Brownie, you're doing a heck of a job" - President Bush on 9/2 to FEMA Director Michael Brown (pictured, middle)

Even right-wing cheerleader Michelle Malkin is calling Brown "utterly clueless" while calling for his head... but Michelle if Brownie is clueless and deserving of a resignation, then what's Bushie for not only hiring him but complimenting him on Friday?

While we wait for that answer, here's a rundown on some troubling news that came out yesterday, followed by some good news.

But first watch this clip from today's Meet The Press of a grown man who has had enough and cant even keep it together any more based on what you will read below, and after you watch it you should ask yourself why is the president still in washington, and moreso, why are we still allowing him to be our leader now that it has become absolutely plain that he cannot help us when we need help or where we need help.

He hired Brown, who had no experience. He sent the Nat'l Guard to Iraq where there were no WMDs, he flew away from the South a day after the hurricane, and he still hasnt stepped foot in New Orleans as people continue to literally drown in his failures.

9/3 Chicago Sun-Times: "Daley 'shocked' as feds reject aid"
All FEMA allowed them to send was one tank
(Chicago) Mayor (Richard) Daley said the city offered 36 member s of the firefighters' technical rescue teams, eight emergency medical technicians, search-and-rescue equipment, more than 100 police officers as well as police vehicles and two boats, 29 clinical and 117 non-clinical health workers, a mobile clinic and eight trained personnel, 140 Streets and Sanitation workers and 29 trucks, plus other supplies.
9/3 RedCross.org: Red Cross Not Allowed in New Orleans
Acess to New Orleans is controlled by the National Guard and local authorities and while we are in constant contact with them, we simply cannot enter New Orleans against their orders.

The state Homeland Security Department had requested--and continues to request--that the American Red Cross not come back into New Orleans following the hurricane. Our presence would keep people from evacuating and encourage others to come into the city.
9/3 AFP: Angry LA Senator accuses President Bush's visit as a Staged, Phoney "Photo-Op"
Perhaps the greatest disappointment stands at the breached 17th Street Levee.

Touring this critical site yesterday with the President, I saw what I believed to be a real and significant effort to get a handle on a major cause of this catastrophe.

Flying over this critical spot again this morning, less than 24 hours later, it became apparent that yesterday we witnessed a hastily prepared stage set for a Presidential photo opportunity.

The desperately needed resources we saw were this morning reduced to a single, lonely piece of equipment.
9/3 Race has nothing to do with this? Army Times, Brig. Gen Gary Jones, commander of the Louisiana National Guard’s Joint Task Force told the Army Times on Friday that hundreds of armed troops were going to "take this city back"
"This place is going to look like Little Somalia," he said. "We’re going to go out and take this city back. This will be a combat operation to get this city under control."
9/3 CNN.com DHS Has Failed to Release Nine Stockpiles of Emergency Gear
Nine stockpiles of fire-and-rescue equipment strategically placed around the country to be used in the event of a catastrophe still have not been pressed into service in New Orleans... The gear -- including generators, radios, breathing apparatus, cots and other items -- is stockpiled by DHS in nine locations. The three closest to New Orleans are College Station, Texas; Columbia, S.C.; and Clearwater, Fla. The gear is intended to replenish or sustain up to 150 first responders.

Contractors who maintain the gear are required to transport it to a disaster site no later than 12 hours after the initial request is made by local authorities and approved by DHS.
9/3 NO Times-Picayune: Tons of Food Delayed When Bush Arrived
Three tons of food ready for delivery by air to refugees in St. Bernard Parish and on Algiers Point sat on the Crescent City Connection bridge Friday afternoon as air traffic was halted because of President Bush’s visit to New Orleans, officials said.

The provisions, secured by U.S. Rep. Charlie Melancon, D-Napoleonville, and state Agriculture Commissioner Bob Odom, baked in the afternoon sun as Bush surveyed damage across southeast Louisiana five days after Katrina made landfall as a Category 4 storm, said Melancon’s chief of staff, Casey O’Shea.
9/3 DailyKos: NorthCom had millions of meals and supplies available, but no order from the President to deploy
A: Now I'm sure you're aware of the criticism that the authorities have been slow to respond to this. When did you get the order to start relied work?

K: NorthCom started planning before the storm even hit. We were ready for the storm when it hit Florida because, as you remember, it crossed the bottom part of Florida, and then we were plaining, you know, once it was pointed towards the Gulf Coast. So what we did was we activated what we call defense coordinating officers to work with the state to say okay, what do you think you'll need, and we set up staging bases that could be started. We had the USS Baton sailing almost behind the hurricane so that after the hurricane made landfall it's search and rescue helicopters would be available almost immediately. So we had things ready. The only caveat is, we have to wait until the President authorizes us to do so. The laws of the United States say that the military can't just act in this fashion, we have to wait for the President to give us permission.
9/3 AP: Federal Paperwork Stalled Nat. Guard Response
Several states ready and willing to send National Guard troops to the rescue in New Orleans didn't get the go-ahead until days after the storm struck — a delay nearly certain to be investigated by Congress.


8/17/04 SP Times Hours After Hurricane Charley Hit FLA, Bush Approved Aid to Bush
Gov. Jeb Bush sought federal help Friday while Charley was still in the Gulf of Mexico. President Bush approved the aid about an hour after the hurricane made landfall.

By Monday afternoon, the cavalry seemed to be in place.
Email Post

Anonymous said…
Video blogs gaining in popularity
Pete Prodoehl edits video that he will upload to his video blog site at his Oconomowoc, Wis., home.
Nice stuff...you have a great blog here! I'm definitely going to bookmark you!