Last night was Melissa's night in the spotlight at the Pocket. I showed up a little before eight, as that was the time I was told the contest began. I was wrong. It didn't start until after nine. What's a boy to do except down a few Windsor-Cokes.
One of the candidates for Melissa's big date didn't show up, so I was recruited by Cade to replace that person. Unfortunately, I was seated next to Bachelor #3, who looked like the bastard son of Charles Manson and Dee Snider. I wanted to ask him where he buried the bodies, but I wanted to live to see the next day.
Finally, Melissa was introduced by the crowd and began her questioning. My advice to the beautiful Melissa is to find another writer if she ever considers doing this sort of thing again. We were asked to answer questions in various voices; she wanted us to sing. At one point we had to arm wrestle. I decided early on to work harder on gaining laughs then scoring points. I must have failed miserably as the audience voted me off after the first round.
Oh well. I had a good time and met some cool people, including the two lovely ladies who claimed to be fans of Get Out of Town. 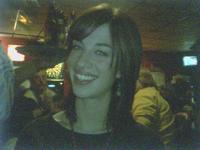 Anonymous said…
I don't like that picture of me. You caught me by surprise. My nose looks huge.

As for the questions, they were more for entertaining the crowd than for me finding a guy. The crowd had fun and that's all that matters.

Stop being a sore loser. ;)

Scott said…
Ms. Whiner, the photo has been removed. And half of your friends hated me? That hurts.
6:20 PM