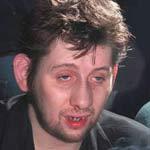 MacGOWAN TO BUY NEW TEETH
Hellraiser SHANE MacGOWAN is so sick of being famous for his toothless mouth, he's undergoing surgery to convert his gum-revealing smile into a gleaming white one.

The Irish frontman of THE POGUES - whose teeth have been rotted by alcohol and drug excess - was presented with a false set on British TV's THE FRANK SKINNER SHOW last year (04), and he was impressed with his "handsome" appearance once he'd inserted them into his mouth.

And MacGowan has now taken his bid for a better mouth one step further by setting aside the money he recently earned from a Pogues reunion tour to pay for the dental work.

He says, "I'm going to get my teeth fully sorted this year. People seem surprised to hear it but it's something I've wanted to do for ages. In the recent past I never had the money.

"But the cash from The Pogues shows has come through. I put in false teeth on Frank Skinner's chat show and thought I looked rather handsome."
Email Post