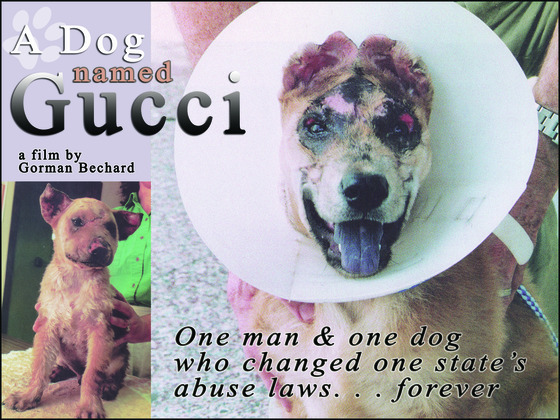 If there was ever a dog who could be described a rock star, it would have to be Gucci. He was the victim of horrific crimes, left for dead while on fire hanging from a tree. Doug James heard the dog's cries, and saved him. He wasn't expected to last the night, but he hung on...for sixteen years.
Unfortunately, the law wasn't on Gucci's side, and the three assailants were basically slapped on the wrists. James knew something had to be changed, and with Gucci as a living symbol that the current laws were not sufficient, the pair was able to get the state of Alabama to make domestic animal abuse a felony. "Gucci's Law" became a reality.
Color Me Obsessed director Gorman Bechard told me months ago that he has always been looking for a story about dogs to document, and here it is. Just as he did with not only Color Me Obsessed, but also the Archers of Loaf concert movie, What Did You Expect?, and the upcoming Grant Hart documentary, Every Everything, he is utilizing kickstarter to help raise funds for the project. If you want to be involved, or would like to see more information on Gucci, please check out ADogNamedGucci.com.
Bechard is on tonight's Live Ledge to talk not only about this new project, but the full slate of current projects that showcase his love of the subject. Color Me Obsessed and What Did You Expect? were just released on DVD, and the Grant Hart film is in the final stages of editing. When Gucci's movie is funded, filming will immediately proceed.
Besides the chat with Gorman, tonight's show also celebrates the birthdays of Tom Waits and Little Richard, and also commemorates two rock and roll tragedies. Yesterday marked the 43rd anniversary of the Rolling Stones' free concert at Altamont that resulted in the death Meredith Hunter, and the chaos of that moment is heard in the recordings from that show. Tomorrow is also the 33rd anniversary of the fatal shooting of John Lennon, so a short set of cover tunes finished up today's program.
Please, go check out the kickstarter site for A Dog Named Gucci, and also consider picking up Color Me Obsessed and/or the Archers of Loaf flick. To hear this show, stream it via Stitcher or The Ledge android/iPhone app, or...