The Walking Rock Alphabet: I

My initial intention was to not bother with today. Between the morning’s Rural Ledge-ucation broadcast, laundry, and pure laziness, I didn’t have much desire to do anything. Plus, I’ve been putting off my end of the year lists and CD sets, and time is closing in for me to have these ready by Christmas.
The problem I’m having this year is declaring my Top 5 albums of the year. I have close to 100 releases that deserve a place on my list, but there is nothing that has set itself so far apart from the pact that it deserves to be on top. 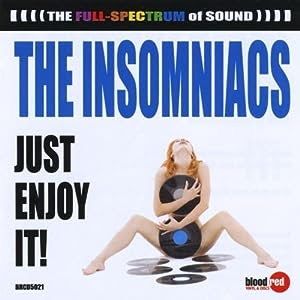 So as football started, I began trolling through my iTunes library to start taking notes, but then I started to feel guilty about not heading outside. Here it is December 2, and my weather app was constantly reminding me that it was 62 degrees! That’s right, September temps in December!
Fine, I’ll make it outside, but what should I listen to? The obvious choice in the “I” section was Iggy Pop, but I wasn’t feeling it. Instead, I chose a band that received a lot of airplay last year, and who has a great name - Insomniacs.
Unfortunately, though, I don’t have a story to tell here. Yes, the album in question, Just Enjoy It!, was a power pop fave of 2011, but I don’t really know much about them, and their online presence is pretty meager. It also doesn’t help that there is a blues band called The Insomniacs. (Even googling their name with the album title gives you more medical advice sites than music info.)
Here’s what I do know, and believe it or not this info came from Myspace. They formed in 1989, and after a couple of singles were picked up by renowned garage rock label Estrus. They continued to release singles and full-lengths until 2004. In 2010, they reunited with a slightly different lineup, and this album is the result.
That’s it. In fact, I didn’t discover anything about the members of the band outside of their first names. Oh yeah and the fact that Little Steven loves them and gives them plenty of Underground Garage airplay.
Let’s just say that if you enjoy Beatles-ish melodies performed with Small Faces-ish soul with power pop enthusiasm, then this is the album for you. That’s all I’m giving you tonight because I need some more coffee. And I have a load of laundry to put in.
Email Post
Labels: insomniacs scott hudson walking rock alphabet

Anonymous said…
hey scott: ran across your nice review of our most recent lp, "just enjoy it!" hmm... 20 years of putting out records, you'd think we'd have more of an "internet presence". check out www.estrus.com for some old info. www.facebook.com/theinsomniacsrocknroll for more recent crapola. happy new year. bob insomniac (not a bluesman).
8:08 PM